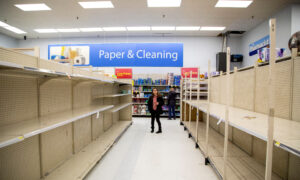 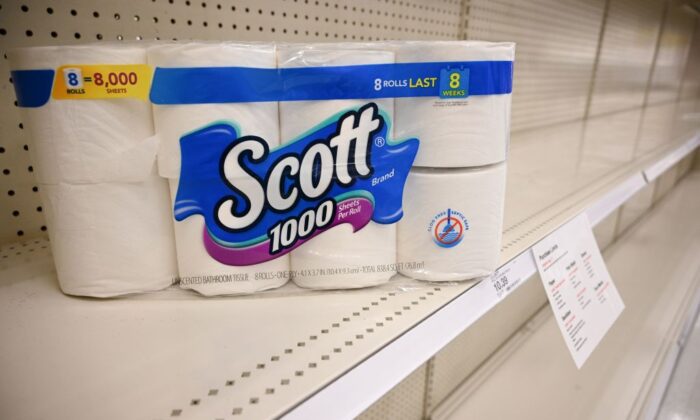 A package of toilet paper sits on an otherwise empty shelf in the paper products aisle of a store in Burbank, Calif., on Nov. 19, 2020. (Robyn Beck/AFP via Getty Images)
Southern California

The region landed in the purple tier on Nov. 16, prompting Gov. Gavin Newsom to order the closure of indoor gyms and cinemas. Restaurants are now prohibited from offering indoor dining. He later imposed a statewide overnight curfew for all purple tier counties, which took effect Nov. 21.

With the new orders in place, shoppers have been stockpiling on essentials as they did back in March. Stores appear to be better prepared this time around, and have placed limits on popular items to prevent shoppers from overbuying.

“We remind our customers constantly—and that’s why we have the quantity limits—to take what you need, and leave something behind for your neighbor,” Ralphs director of corporate affairs, John Votava, told The Epoch Times. “That’s the biggest thing that we can advocate for.”

Votava said the Ralphs supply chain “looks strong,” and that there haven’t been widespread reports of empty shelves at the grocery store chain.

Yet Costco, Ralphs, and Walmart have experienced stockpiling buyers in Tustin, Mission Viejo, and other Orange County cities, residents reported on Facebook.

Among items that are being hoarded are toilet paper, paper towels, canned food, cleaning supplies, and dry foods.

Walmart spokesperson Casey Staheli told The Epoch Times in an email: “As we would normally do during periods of high demand, we are working through our best-in-class supply chain to replenish items as quickly as possible.

“Our efforts include diverting products to areas as needed, coordinating supplier deliveries directly to stores, and taking several other measures to help us meet the needs of our customers.”

According to Katie Denis, vice president of research at the Consumer Brands Association (CBA), “retailer limits are a responsible way of ensuring that everyone gets what they need.”

She said the industry is in a fundamentally different place than earlier this spring.

“I think that we’ve increased the resiliency of our supply chains and have done so much to ramp up production—from 24/7 shifts, to contracting with external manufacturers—really making sure we can get the things that people need and rely on,” Denis told The Epoch Times.

She said grocery stores are a consumer-centric industry that will do everything possible to meet the demand, and the industry shifted in real time to adjust to the panic-buying seen earlier in the year.

One of the challenges brought on by stockpiling, though, is price gouging.

“What we do not want to see is people hoarding supplies and charging obscene amounts for them on third-party websites and things of that nature,” Denis said. “That is never OK. There is no manufacturer that makes products that will ever charge that much.”

Denis is optimistic that the hoarding won’t be as bad as in the spring. According to a survey that CBA conducted, 65 percent of Americans aren’t afraid of a shortage, while nearly one-third is.

“So I think we just have to be mindful of buying what we need, not more than we need, and making sure that everyone has enough, because everyone should have enough,” Denis said. “At this point, I think that we have really strengthened to a degree that that’s possible.”