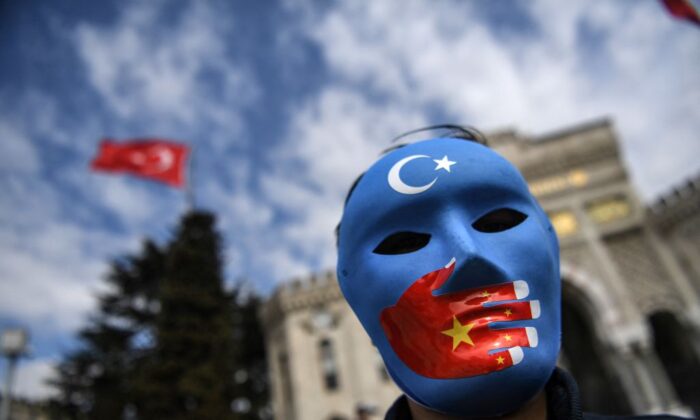 A demonstrator wearing a mask painted with the colours of the flag of East Turkestan takes part in a protest by supporters of the Uighur minority on April 1, 2021 at beyazid square in Istanbul. (Ozan Kose/AFP via Getty Images)
Australia

A new report from the Australian Strategic Policy Institute (ASPI) has found the Chinese Communist Party is looking to influence international perceptions of the Chinese regime’s policies in the Xinjiang region through social media.

The campaign, which has featured videos from Uyghurs saying they’re happy with their life in the Xinjiang region, promoting Xinjiang as a tourism destination, and praising Beijing’s policies on the Uyghur people, have all been linked with the hashtag #StopXinjiangRumors on Twitter.

Despite abundant evidence and international condemnation, the CCP has constantly denied accusations of committing human rights abuses in the Xinjiang region towards Uyghurs, which includes forced labour, mass detention, sterilisation, and genocide.

The study revealed that a large number of inauthentic accounts, including some used to share pornographic material, are now being used to help with the CCP’s whitewashing efforts in multiple languages.

Twitter attributed both datasets to the Chinese regime, with the latter specifically linked to a company called Changyu Culture, which is connected to the Xinjiang provincial government. The #StopXinjiangRumors hashtag features prominently in both datasets.

Some key features of the datasets include:

The first dataset, CNHU, shared many videos originated from Douyin and worked to promote the CCP’s state media, such as China Daily, the China Global Television Network (CGTN), and Global Times.

This dataset contained a large number of rebuttals to international criticisms of the CCP’s policy in Xinjiang and featured phrases commonly seen in state propaganda, such as “Xinjiang is a wonderful land.”

“As we’ve noted, the network was active on issues related to health, such as life expectancy and population growth,” the authors stated in the report. “CCP policies in the region are framed as counterterrorism responses as a way of attempting to legitimise actions, while negative information and testimonies of abuse are simply denied or not reported.”

Twitter gave advanced access to the two data sets to the authors of the report, although it hasn’t released the methodology by which the dataset was selected.

“The dataset may not represent a complete picture of Chinese state-linked information operations on Twitter,” the authors stated in the report.