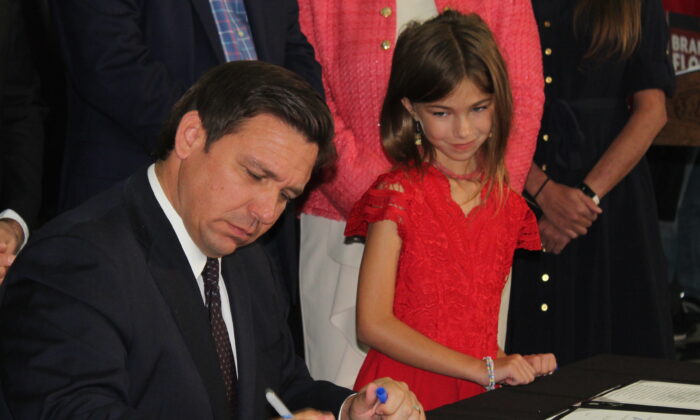 On Dec. 15, Florida Gov. Ron DeSantis announced the Stop the Wrongs to Our Kids and Employees (W.O.K.E.) Act, “a legislative proposal that will give businesses, employees, children, and families tools to fight back against woke indoctrination.”

“The Stop W.O.K.E. Act will be the strongest legislation of its kind in the nation and will take on both corporate wokeness and Critical Race Theory” (CRT) reads the Dec. 15 press release. “Today’s proposal builds on actions Governor DeSantis has already taken to ban Critical Race Theory and the New York Times’ 1619 project in Florida’s schools.”

“The Stop WOKE Act would empower parents, students, and employees by creating a private right of action,” DeSantis Press Secretary Christina Pushaw said in a statement. “Individuals would be able to sue for discrimination if they are subjected to training or instruction that creates a hostile environment by promoting the discriminatory concepts that underpin CRT.

“In addition to combating CRT in education,” Pushaw added, “the proposed Stop WOKE Act would make Florida the first state in the country to ban CRT-inspired indoctrination in the workplace.”

“Success is generated from hard work and determination not the color of one’s skin or one’s sexual orientation,” Sharp, a candidate for District 24 Florida House of Representatives, told The Epoch Times. Having spent almost a decade in management with Lowe’s companies, Sharp attended a diversity and inclusion training in 2016 where he and a room full of others were told they “had racist biases built into their personalities.”

“I remember thinking on that day ‘this doesn’t feel right,” Sharp said. “Fast forward five years and now this narrative has reached all the way from private employers into our school systems. To teach a child of color or tell a person of color that they are starting behind the game is inherently racist. By signing this legislation, Governor Desantis is making a strong statement that the people of Florida must stand united. My only disappointment is that this legislation had to come from the desk of the governor. With a Republican supermajority in the legislature, this should have happened months if not years ago from our legislators. It’s time that Americans stop identifying as anything other than Americans. Our schools must be a place where children can focus on mental, social, and emotional growth while learning factual information regarding American history, and frankly learning life skills. Rogue school boards across the state have repeatedly shown that they are unwilling to stay within the guard rails set for them, so this gives parents the option to defund them, should they choose to reach beyond their oath of office and choose their personal agendas over the quality of the education of children. God bless America and God bless the Free state of Florida!”

While Flagler County school board member Jill Woolbright applauds the governor’s proposal to bolster his ban on CRT, she feels something must be done to address the textbooks that were already adopted before the initial CRT ban was established in June.

“Governor DeSantis new legislative proposal, Stop WOKE Act, would not only help stop the WOKE teachings of CRT in our schools in Flagler County, but is desperately needed to be able to enforce the Governor’s ban of CRT last June,” Woolbright told The Epoch Times. “The problem is, before Gov. DeSantis banned the teachings of CRT, the state had gone through textbook adoptions for English Language Arts classes for grades K-12. The procedure requires the state to approve varying publishers’ curriculum for the counties to select from to adopt. Unfortunately, these textbooks were written and approved before the governor’s ban on CRT instruction, and our brand-new textbooks purchased just this year appear to be riddled with CRT ideology.”

As Woolbright explains, several parents have brought forth challenges recently claiming CRT instruction is happening in Flagler Schools. While CRT has not been found in the Social Studies classes, it has slipped into the informational passages in the new English Language Arts curriculum by Benchmark Education.

“Couple that with the fact that there are ‘woke’ staff members, district office leaders and school board members that believe in the ideology of CRT, and you then have a big problem weeding out CRT instruction in our schools,” Woolbright contends. “Parent rights have been trampled on for far too long, but our governor and state legislature are aggressively moving to give parents back their rights to have a voice in their children’s education. If this proposed legislature goes through, parents will indeed have the power to force compliance in the state’s school districts by ensuring district administration make employees comply. As a school board member, I would welcome the help of state government and our parents/families to force compliance which seems next to impossible otherwise. I will do anything I can to help the governor get the Stop WOKE Act into law for the protection of our children and future generations.”

Quisha King, the Florida mother and Moms for Liberty activist whose comments before the Duval County School Board went viral, said this new initiative is another great idea from Florida’s governor.

“I think it’s great,” King told The Epoch Times. “Along with everything else he’s done, like expanding school choice, I think it accomplishes some of the same goals. This will force teachers and school boards to stop pushing the woke curriculum.”

King is particularly fond of the aspect that empowers parents and employees in the Sunshine State to fight back legally.

“Legally, it’s great for parents to be able to say; ‘hey, this was brought into my kid’s school and I’m going to take this to court.’ It’s a good tool for parents to use to push back on the school boards and corporations for them to stop the nonsense,” King said. “This wokeism has just infected so many of our institutions and corporate America is just another one and I think it’s great for employees to have legal tools at their disposal to say, ‘if I’m going to be harassed, I’m going to fight back.’ Just like if I was being sexually harassed. I shouldn’t have to be racially harassed either. So I think it’s great legislation for employees and parents to fight back against wokeism.”

Tiffany Justice, co-founder Moms for Liberty is encouraged by the governor’s new effort.

“The Stop the Wrongs Against Kids and Employees Act is one more step on the journey of parents reclaiming their children’s education in America today,” Justice told The Epoch Times. “The governor’s plan is historic in that it creates a partnership between the state and parents, giving the responsibility and power to parents to help keep Florida’s schools safe for all kids.”

“I am thrilled and feel privileged that I was able to stand next to our governor as he presented the Stop Woke Act which supports parents in their fight for parental rights,” Jimenez told The Epoch Times. “As a daughter of a political prisoner in Cuba, I feel strongly that our children have the right to learn the history of our country instead of the indoctrination of critical race theory.”