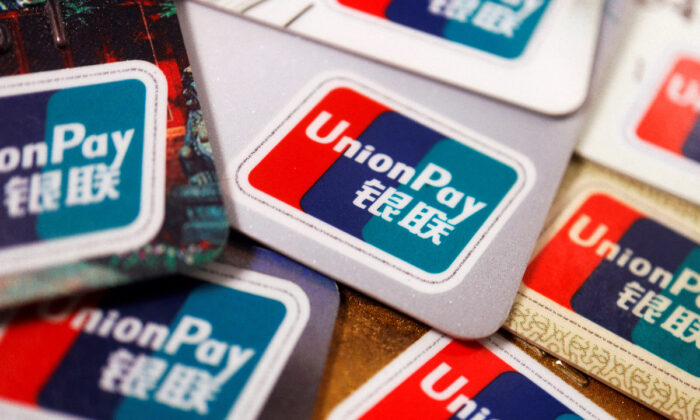 “Russian money is bloody! It helps Russian missiles attack dwelling houses, kindergartens, and hospitals in Ukraine, and kill civilians!” Fedorov posted in Chinese on Twitter on March 12, calling on UnionPay International (UPI), a subsidiary of China UnionPay that offers cross-border transactions, to suspend services in Russia.

The latest message followed a March 8 post with the same message written in English, along with a letter sent to UPI’s CEO Li Xiaofeng. Fedorov pressed the company to stop doing business in Russia until the country’s attacks on Ukraine end with fair order restored.

Aided by the Chinese Communist Party, which has largely sided with Moscow and refused to denounce its invasion of Ukraine, UnionPay is the provider of most card payments in China and is used in 180 countries and regions. Numerous Russian banks, such as Rosselkhozbank, Pochta Bank, and Gazprombank, already offer services with UnionPay.

Fedorov‘s appeal has yet to receive a response from UPI.

From Big Tech to fast food, companies have been distancing themselves from Russia in the wake of its attack on Ukraine, which began on Feb. 24. As of March 11, compiled data shows that more than 340 companies have withdrawn from Russia, while others announced to scale back their businesses.

The European Union, the United States, and their allies announced on Feb. 26 to cut off a number of Russian banks from SWIFT, the main international payment system, as part of their state-level economic actions to hold Moscow accountable for its assault on Ukraine.

In a bid to isolate Russia from the global financial system, Mastercard and Visa, the world’s biggest credit card and digital payment processors, announced suspension of their credit card services to Russian banks on March 5. The move has largely barred Russian users from the services when they are overseas.

Fedorov has kept urging foreign companies to sever ties with Moscow, including Taiwanese electronics company AsusTek Computer. Yet. the recent call on UnionPay is the first one posted in the Chinese language.

The March 12, the post in Chinese drew responses from overseas Chinese web users. Many expressed solidarity with Ukraine and urged for secondary sanctions against UnionPay.

“I am sorry. I am Chinese yet such things are not at all [what] our people should be involved with,” netizen Ning Meng Tao wrote in comments.

“Dictator[s] always stand on [the] same side,” wrote another user named Siu.

Besides Visa and Mastercard, American Express and PayPal have also announced a withdrawal of their services. PayPal said that it will block all electronic wallets of Russian accounts from March 18, after suspending its services in Russia earlier this month.

U.S. Secretary of State Antony Blinken said on March 7 that China “talks a lot about the importance of upholding international order, stability, respecting sovereignty,” but has offered no action when it comes to the Ukraine crisis.

Early last week, China reaffirmed its partnership with Russia, as its foreign minister, Wang Yi, said the two neighbors enjoyed a “rock-solid” relationship and would be “free from interference or discord sown by third parties.”

White House press secretary Jen Psaki, however, said in a March 7 press briefing that Moscow can’t backfill the impact of Western sanctions by relying on China. “It’s just not possible,” she said, given that the G7 countries alone make up about half of the global gross domestic product, while Russia, Ukraine, and China, account for about 15 percent.