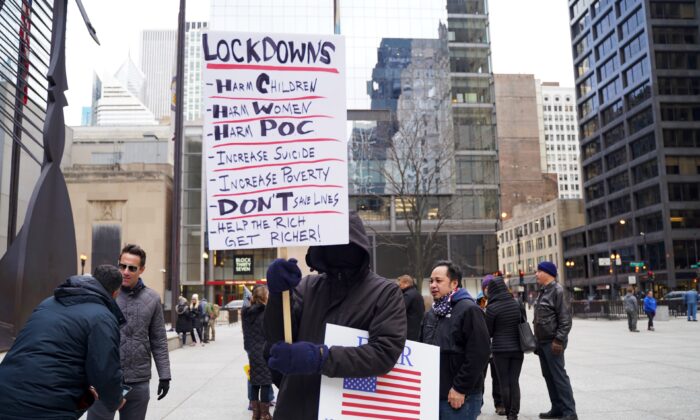 Glen, a nurse at a hospital in Chicago, participates in a protest against COVID-19-related lockdowns in Chicago, Ill., on Dec. 5, 2020. (Cara Ding/The Epoch Times)
Viewpoints

Stop the Lies: Lockdowns Did Not and Do Not Protect the Vulnerable 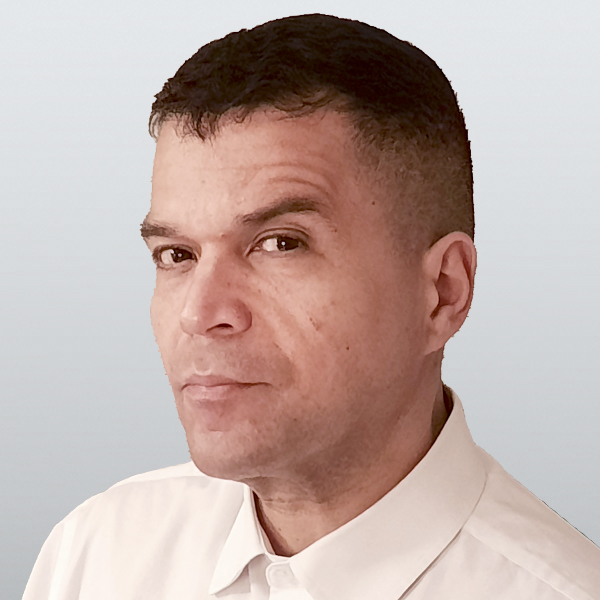 Lockdowns didn’t protect the vulnerable, but rather harmed them and shifted the morbidity and mortality burden to the underprivileged.

We locked down the healthy in society, which is nonsensical, while at the same time failing to properly protect the actual group that lockdowns were proposed to protect: the vulnerable and elderly.

Any epidemic or pandemic steps to mitigate severe outcomes cannot only focus on the harms from the pathogen, but must also focus on the harms from the policy steps, such as lockdowns and school closures. Why? Because lockdowns (also known as non-pharmaceutical interventions) have crushing effects and function to exacerbate inequalities. Women and children have fared worst of all due to the effects of lockdowns.

“Evidence already shows serious damage to the physical, mental and social wellbeing of children and young people, as well as their educational attainment and future prospects,” according to the Pandemics Data & Analytics (PANDA) group.

Perhaps Dr. John Lee wrote it best back in March 2020:

“The moral debate is not lives vs money. It is lives vs lives. It will take months, perhaps years, if ever, before we can assess the wider implications of what we’re doing. The damage to children’s education, the excess suicides, the increase in mental health problems, the taking away of resources from other health problems that we were dealing with effectively.

“Those who need medical help now but won’t seek it, or might not be offered it. And what about the effects on food production and global commerce, that will have unquantifiable consequences for people of all ages, perhaps especially in developing economies?”

For example, according to an article on the American Institute for Economic Research website, “in Toronto, the incidence rates were the same at the beginning of the pandemic, but after the March 23 lockdowns, detected cases declined in affluent neighborhoods while they skyrocketed in less affluent areas. A similar effect was subsequently observed for mortality.”

In a similar light, an informative paper in the journal Nature examined mobility network models of COVID-19 to explain inequities and inform reopening. The authors found that higher infection rates among disadvantaged racial and socioeconomic groups could be predicted “solely as the result of differences in mobility: we find that disadvantaged groups have not been able to reduce their mobility as sharply, and that the points of interest that they visit are more crowded and are therefore associated with higher risk.”

In both affluent first-world nations and even lesser-developed nations, the more wealthy in these societies have not been as impacted by the lockdowns as poorer people. Their concerns were not as pressing, they didn’t need to worry about their children when the schools were closed, or the need for proper laptops and internet access and tutors. They had home offices they could remodel and make their accommodations more comfortable, while the poorer had to go out to “in-person,” often high-risk employment.

Because they were the “essential workers” and had the front-facing, high-contact, high-risk jobs, poorer people suffered two pandemics: one due to the virus and the other due to the impact of the societal lockdowns. And their children fared worst of all.

The people who made the decisions to lockdown and close schools had the type of jobs that could allow for remote working, and this could continue forever if they could have it. They were always far removed from the crushing impact of their policies. They didn’t “feel” the lockdowns, and for some, it was like an extended vacation where Amazon and Uber became staple names in their households. It was actually fun for many. You could walk your dogs at your own pace, and tend to your garden, fix up the house, do your chores, and so on. Even vacate. The poor had no such avenues and were ravaged by the lockdowns and incurred losses that, by some estimates, will never be recovered.

To think that lockdowns worked to protect vulnerable persons is indeed a fallacy and terrible misconception.

What have we found out about the illogical and unscientific societal restrictions since March 2020? This is not “new” data or evidence as the Centers for Disease Control and Prevention would tend to say, for this data began emerging soon after the catastrophic lockdowns and school closures began in spring of 2020.

We learned that many of the things that the U.S. Task Force and other medical advisers called for and implemented were destructive and caused devastating consequences for economies and lives.

But we knew quickly how to manage COVID-19 and that the virus was treatable with existing cheap, safe, and effective therapeutics, when applied early in the disease sequelae. Yes, early outpatient treatment with existing repurposed therapeutics would have played a major role in closing off this pandemic much earlier. Yet, what did we do? We shut our societies down and moved massively toward vaccinating the nation. We refused to consider the potent role of natural immunity and COVID-19 recovered immunity, as well as cross-protection immunity. It went counter to all of what we knew and were seeing.

Opponents of lockdowns have argued with governments since spring 2020 against these draconian and unscientific policies, and that the approach must be nuanced and finessed, and “focused” with an age-targeted, risk-based approach.

We had learned very early on that COVID-19 was amenable to risk stratification, and age (and obesity) was the principle risk factor, along with diabetes, renal disease, and so on. Acquired immunity due to exposure, some cross-reactivity cross-protection to other coronaviruses (common cold), as well as innate resistance to begin with was the pattern we were observing.

We were seeing that the vast majority of people were at no risk for serious illness or death, and only a small sliver of the population was at risk. In fact, the specific high-risk group, for example, elderly people with underlying medical conditions, was more focused than for influenza, since influenza cuts a wide swath, including being devastating to children.

As two lockdown critics, Dr. Sunetra Gupta and Dr. Martin Kulldorff, wrote last December, “A key feature of COVID-19 is that there is more than a thousand-fold difference in the risk of death between the oldest and the youngest.”

The argument was to strongly protect the vulnerable first as they were the key target group for the SARS-CoV-2 pathogen and allow the rest of the low-risk healthy population to live reasonably normal lives, taking sensible common-sense precautions.

Early data was showing us that people over 75 to 80 years old were over 10,000 times more likely to die of COVID-19 if infected than someone under 10 years old. Thus, why would we have a blanket lockdown when there’s so much risk differential? We could look at the situation in the rest of the low-risk “open” population and only if we saw hospitalizations increase markedly, then we would move to impose restrictions on them.

While we knew this, descision-makers, the media, and television medical experts attacked those who disagreed with government policies and pilloried them. They, the governments, and their scientific advisers “knew best.” This led to catastrophic decisions that continue today.

It’s utter nonsense and an absurdity to think we cannot protect the elderly and vulnerable as a basic part of any response. To date, we have failed catastrophically.

So now, given we spent the last 15 to 16 months shielding the wealthier from the ravages of the lockdowns, we even have rumbles among the more financially able about why should we even lift the lockdowns. Do we do it now? How about we wait? Do we move to re-open schools? To this “laptop” class, the lockdowns are a mere small inconvenience, and why lift it? Hey, keep it going if you have to. Remote schooling or in-person? Either way, my child has no risk so, “What’s the bother? What’s all this fuss? Any format will do.”

In no country, no setting, is there any evidence that lockdowns, school closures, shelter-in-place, social distancing, mass asymptomatic testing, and mask mandates worked. This is why the father of epidemiology and eradicator of small-pox, Dr. Donald Henderson, argued in 2006 (pdf) against these devastating measures even for more lethal pathogens, for he knew of the disastrous outcomes.

Yet, advisers and government leaders appeared to shelve all of the important evidence they already had to guide them. Something other than science was at play, and while at it, the poor suffered irreparably. And now the narrative to vaccinate children when their risks from COVID-19 infection are below the risks of harm from the vaccine itself defies all logic.

The focus of this op-ed is not the COVID-19 vaccines, but we would be reckless not to raise them. We’re calling for all regulatory and government bodies to stop this unscientific, illogical, irrational, and dangerous move to vaccinate our children in this regard. Given children’s very low risk of acquiring infection and spreading it as well as becoming severely ill from it, and given harms were not excluded by the existing vaccine research to date, then this must be stopped.

“Children and young people do not benefit from the COVID-19 vaccine as their risk from the disease is almost nil. Mass vaccination and vaccine trials on healthy children are therefore unethical,” according to PANDA.

Importantly, based on emerging reports of blood clots, bleeding irregularities, and myocardia, we would be placing our children at risk without properly safety testing the vaccines.

In this pandemic, the burden has shifted near entirely to the poor, and particularly our poor children, and they, near entirely, are left to pick up the pieces of this disaster.

Dr. Paul Elias Alexander, Ph.D., has extensive training in evidence-based medicine and clinical epidemiology as well as being a research methodologist. He has graduate schooling at Oxford in the UK, the University of Toronto, McMaster in Hamilton, Ontario, and some training in the epidemiology of bioterrorism at Johns Hopkins under Dr. Donald Henderson (who eradicated small pox).

Howard Tenenbaum, DDS, Ph.D., is the dentist-in-chief at Mount Sinai, as well as head of the division of research at the hospital’s dentistry department.

Parvez Dara, M.D., MBA, is an oncologist in Toms River, New Jersey. He received his medical degree from King Edward Medical University and has been in practice for more than 20 years.

Howard Tenenbaum
Follow
Howard Tenenbaum, DDS, Ph.D., is the dentist-in-chief at Mount Sinai, as well as head of the division of research at the hospital’s dentistry department.

Parvez Dara
Follow
Parvez Dara, M.D., MBA, is an oncologist in Toms River, New Jersey. He received his medical degree from King Edward Medical University and has been in practice for more than 20 years.
TOP NEWS