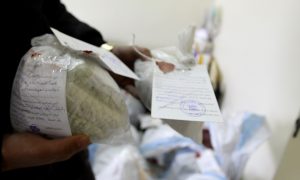 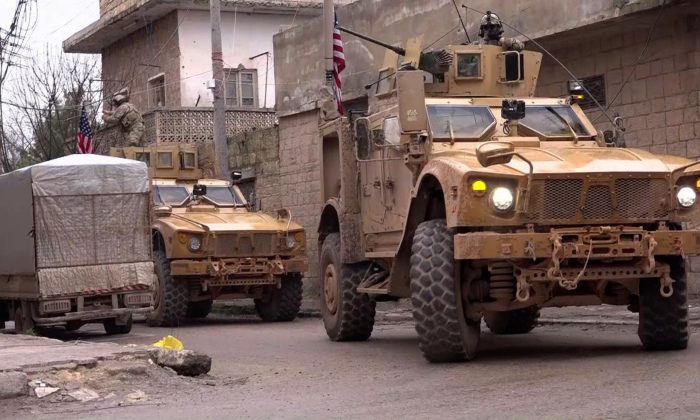 An image grab taken from a video obtained by AFPTV on Jan. 16, 2019, shows US armored vehicles at the scene of a suicide attack in the northern Syrian town of Manbij. (-/AFP/Getty Images)
Viewpoints

Stop the Handwringing About Withdrawal From Syria

President Donald Trump’s decision to begin U.S. troop withdrawal from Syria sets off America’s military establishment and foreshadows Russian dominance there. Or does it?

When Trump announced that the United States would begin to draw down its 2,000-member military presence in Syria, handwringing among some in the U.S. military began in earnest.

The accusation was that Trump was abandoning our allies and making the same “early withdrawal” mistake he accused Obama of making in Iraq. Obama’s Iraq withdrawal, of course, gave rise to ISIS, costing thousands of lives on three continents.

Still, the question remains: “ISIS has been decimated, if not annihilated, has it not?” The answer is “yes and no.”

Yes, ISIS has been obliterated in Syria, reduced to holding a few villages in the north. But has ISIS ceased to exist? No, it has not.

ISIS is, in fact, still operational. What’s more, the ultra-violent Islamic terror group has proven to be quite elastic in its survival. It continues to attract fighters from the Middle East, Asia, and to some extent, Europe and other countries, including the United States. No amount of bombing or boots on the grounds that the United States would be willing to commit would stop that flow completely.

Trump’s likely concern is getting stuck playing “Whack-A-Mole” against ISIS in Syria.

Asymmetric warfare against U.S. forces has resulted in the United States spending lots of treasure and risking American lives for the very marginal benefits of killing a few more ISIS fighters wherever they may pop up. This strategy may provide ISIS the opportunity to sow discord between the United States and allies if it can create policy divisions.

One could conclude that Syria is a crowded combat theater with more potential for escalation than resolution. Do such dubious rewards justify the risks against an extended U.S. military presence in Syria, which remains our enemy?

Trump is certainly right to ask that question. He’s also likely figured that whether it’s Russia or the United States who kills ISIS fighters, either way, they’re just as dead. Besides, a U.S. withdrawal could be as simple as moving troops onto American naval vessels in the Mediterranean Sea.

Arguably, the United States has much more to lose in the region with boots on the ground in Syria.

A big concern, for example, is Turkey, which is waging war against the Syrian Kurds before they revert back to Turkish Kurds. That’s a problem in at least two respects.

For one, the United States would like to avoid any military clash with Turkey, which remains, for the moment at least, a NATO ally. If a clash were to occur, it may trigger a NATO response against the Turks, who may then call on their new friends, the Russians, for support. That would severely complicate an already Byzantine web of alliances and semi-alliances.

Secondly, the rationale for being in Syria is fighting ISIS—not saving the Kurds, even though they’re allies against ISIS. It’s a sticky and ugly calculation, but Trump may have concluded that the two are separate issues—a tough call, but certainly defendable.

Another problem is that, given how far Turkey has moved from official secularism into the Islamic camp in recent years, a military incident—even accidental—between the United States and Turkey may accelerate Turkey’s seemingly inevitable drift to the east. It would certainly further inflame the Islamic world against the United States. That in itself would make it more difficult for our Muslim allies in the region and elsewhere to work with us.

What Does Russian Gain?

A big worry for U.S. military planners is “the advantage” that Russia will gain by a U.S. withdrawal from Syria. But since Syria is already allied with Russia, and Russia is spending boatloads of rubles it doesn’t have battling ISIS, Russia’s leverage over the area is real, but may not be as big of a deal as some make it out to be.

The Russian military budget has shrunk considerably and U.S. sanctions continue to hamper their economy, technological development, and deployment. As the fighting drags on, Syria may become as much of a resource drain as it is a testing ground for potential military sales or a demonstration of Russian military might. And now that they’re there, where can they go next?

Does A U.S. Withdrawal Endanger Israel?

The options are limited. Will the Russians, for instance, escalate their participation with Iran and the Palestinians in their war-making against Israel?

But with U.S.–Israeli relations at a historically high mark, does it seem likely that Trump would put Israel’s very survival at risk? No other president in U.S history has had closer family and political connections to the Israeli government and nation than Trump.

It defies reason to think that Trump’s Syrian policy was made without consulting Israeli leadership. It’s much more likely that the withdrawal plans were made in consultations with the Israelis.

The Israeli’s may well have suggested the U.S. withdrawal. With a shrinking American presence on the ground, it may actually “open up” the area, giving Israel more room to maneuver. It would have a freer hand to react to attacks and other threats without the risk of inflicting friendly fire. Essentially, with or without 2,000 U.S. troops in Syria there’s no doubt that Israel is confident in its ability to defend itself from all in the region.

From that perspective, Trump’s latest Syrian deflection may be smarter than conventional wisdom. It wouldn’t be the first time.