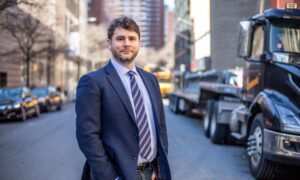 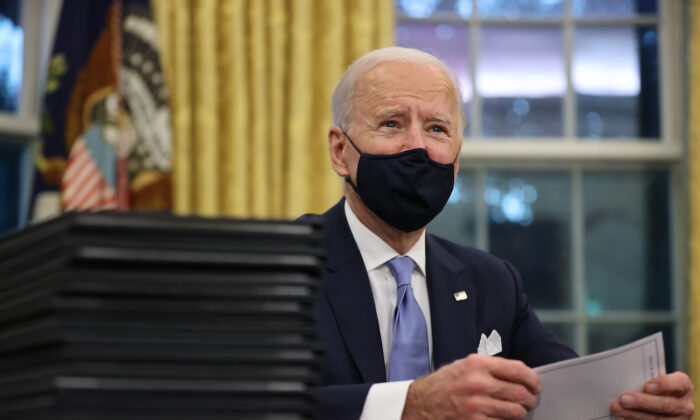 President Joe Biden prepares to sign a series of executive orders at the Resolute Desk in the Oval Office just hours after his inauguration in Washington on Jan. 20, 2021. (Chip Somodevilla/Getty Images)
Viewpoints

Stop Picking at the Scab of Racism

This week in San Francisco, students posted hateful comments about blacks and Jews on a virtual bulletin board that was specifically set up to combat racism, right after a schoolroom lesson on anti-racism. Teachers and parents were rightfully upset.

In the 1960s, blacks were told repeatedly that they were inferior to whites. They were forced to attend certain schools, sit at the back of the bus, drink from “colored only” water fountains, were kicked out of “white” nightclubs and restaurants, banned from employment at certain businesses, barred from living in certain neighborhoods, and denied access to many opportunities that were afforded to white citizens and even to minorities who were not black.

This caused a lot of justifiable anger among many blacks. They were being ostracized because of the immutable characteristic of their skin color.

They reacted in one of three ways. Many ignored the unjust discrimination and attempted to make a life for themselves and their families by simply fitting in and living within the system. That way was decent but brought no pressure to change the system.

Many others held peaceful protests throughout the country in a movement led primarily by the Rev. Martin Luther King, Jr. That movement brought the injustices to the forefront of American politics, gaining allies among other groups including Jews, religious whites, and politicians. That movement brought about significant changes in our society and led to civil rights laws that eventually undid much of the discrimination that had occurred against blacks.

Yet others formed violent revolutionary groups such as the Black Panthers and the Nation of Islam that attempted to change society by spreading hatred and fomenting violence. That movement did more to defeat the cause of blacks and encouraged violent counter-groups. What should be obvious to anyone with even a tiny knowledge of history or human nature, is that these three reactions are the only ones that have ever resulted from unfair discrimination. In fact, what other reactions would even be rational?

Now let’s consider the Critical Race Theory that has become popular suddenly in our country, and the accompanying anti-racism classes that are being forced upon students, corporate employees, and now, with one of President Joe Biden’s executive orders, is being forced upon government workers.

And so what kinds of reactions from whites should we expect from this new kind of unjust discriminatory behavior? There are only three kinds: complacency, peaceful protest, or hatred and violence. No one should be surprised when hatred erupts and eventually violence occurs after “anti-racism” training.

In the ironic attempt to get society to stop racial discrimination, progressives actively divide American society into its component races and then set each race against the other in a competition to determine which race of people is better and which is more victimized than the other.

In my first paragraph, I note that Jews were also the targets of hateful comments that came out of the anti-racism training. Why the Jews? Conveniently for anti-Semites, Jews are minorities when minorities are considered inferior, and they are whites, imbued with “white privilege,” when whites are considered inferior. As Jewish singer/songwriter/comedian/mathematician Tom Lehrer aptly pointed out in his parody song about National Brotherhood Week, “everybody hates the Jews.” And since Jews typically sympathize with the underdog in any situation, many Jews reinforce their own victimization, as pointed out by Jewish attorney and professor Alan Dershowitz in his acclaimed book “Chutzpah.”

For Americans to heal from the wound of the current racial divide, we must stop picking at the scab. Everyone must wake up to the fact that we must judge people solely by the content of their character; that to judge any people by the color of their skin is immoral. Continuing to do so, even in the name of social justice or righting past discrimination, will result in further hatred and violence, and a more divided, prejudiced society, which should surprise no one.