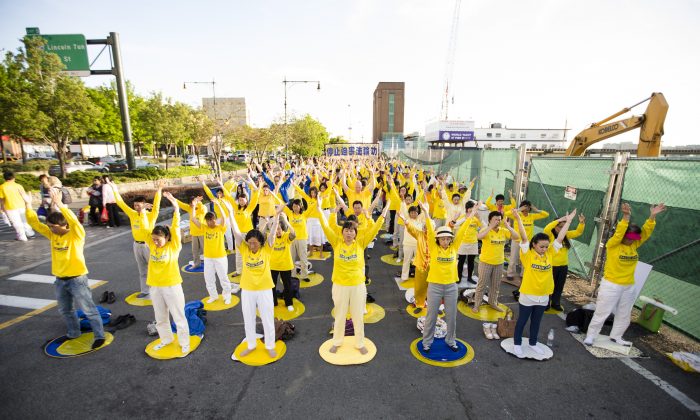 Falun Dafa practitioners protest peacefully in front of the Chinese Consulate General in New York on May 17, calling for an end to the persecution of the practice in China. (Edward Dai/The Epoch Times)
China

NEW YORK—In China they can be arrested, tortured, and subject to forced labor simply for practicing Falun Gong. This is why it is so particularly meaningful for Falun Gong practitioners from around the world to be in New York City, meditating in protest of the brutal persecution of practitioners in China since 1999.

The solemn and silent appeal in front of the Chinese Consulate in Manhattan on Friday evening stretched from 40th to 42nd Street along 12th Avenue. Commuters, tourists, and locals passing by took fliers that explained about Falun Gong’s guiding principles of truth, compassion, and tolerance, and about the Chinese regime’s systematic persecution of practitioners in China.

“I appreciate their bravery,” said Jeri Slavin, a passerby who lives in Hoboken, New Jersey. “Everyone should have the right to a spiritual practice. The whole thing is very moving.”

Those who have lived to tell about the torture and horrendous circumstances in China tell chilling stories. According to en.minghui.org, the official Falun Gong website, 3,690 confirmed deaths of Falun Gong practitioners due to persecution have been documented. The actual number is likely much higher, but a repressive environment in China makes obtaining information out of China’s labor camp and prison system virtually impossible to obtain, due to the regime’s methods.

An estimated 30,000 to 65,000 or more Falun Dafa practitioners were killed for their organs, according to estimates found by two independent studies, by Nobel Peace Prize nominees David Matas and David Kilgour, and by researcher Ethan Gutmann, respectively.

Organ harvesting is a new form of murder by the Chinese regime treating imprisoned Falun Gong practitioners as a living organ bank, offering organs for sale, where the sale of organs means the death of a practitioner.

Those who meditated on May 17 were there to commemorate fellow practitioners who lost their lives, support those still suffering in prisons, and comfort those still yearning to reunite with loved ones.

Ms. Shuhuan Zhao was arrested seven times in China and detained in Masanjia forced labor camp for one year. She was severely persecuted while there, and spoke about it during a rally in front of the United Nations in New York on May 17.

“At Masanjia they are dedicated to specifically torturing Falun Gong practitioners with the sole objective of crushing their spirit and transforming their minds so that they can renounce this peaceful practice of Falun Gong and accept communist party ideology,” said Zhao. She was forced to write statements, had her head smashed against the wall, and was repeatedly shocked and tortured with electric batons.

Zhao is one of around 8,000 Falun Dafa practitioners from all over the world who are expected to gather in New York City this weekend to raise awareness about the persecution in China and about the benefits of the practice.

A grand parade beginning at 12:15 p.m. on Saturday May 18 in Manhattan’s Chinatown will highlight the beauty of the practice, as well as the darkness it experiences in China. Shining through this story of Falun Dafa is always the ardent expectation, especially of those directly affected by the persecution, that one day Falun Dafa practitioners will enjoy freedom of belief.