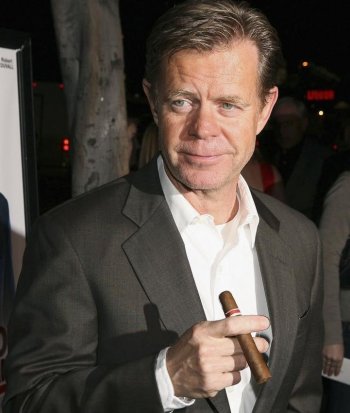 Actor William H. Macy holds a cigar as he arrives at the premiere of Fox Searchlight 'Thank You For Smoking' at the Directors Guild of America in March 2006 in Los Angeles. Health organizations in both Canada and the U.S. want the film industry to cut smoking scenes from youth-rated films. (Kevin Winter/Getty Images)
US

Joan Delaney
Senior Editor, Canadian Edition
Joan Delaney is Senior Editor of the Canadian edition of The Epoch Times based in Toronto. She has been with The Epoch Times in various roles since 2004.
View profile
Follow
biggersmaller
Print
Actors have been lighting up on the silver screen at least as far back as 1942, when Humphrey Bogart and Ingrid Bergman puffed their way through “Casablanca.”

But some medical professionals in Canada and the United States say smoking in Hollywood movies lures young people into taking up the habit, and wants rating systems changed to ensure youth-rated films do not depict smoking.

“Tobacco Vector,” a new study commissioned by Physicians for a Smoke-Free Canada, suggests that 130,000 Canadian teenagers may have taken up smoking as a result of being exposed to it in movies. Of those, an estimated 43,000 will die prematurely from smoking.

The study is based on research from the World Health Organization, the U.S. Institute of Medicine, and the U.S. National Cancer Institute.

“Studies worldwide show smoking in movies is one of the most powerful recruiters of young people into lifelong tobacco addiction,” said Neil Collishaw, research director of Physicians for a Smoke-Free Canada.

“Canadian provincial and federal governments are unintentionally contributing to the problem,” said Jonathan Polansky, author of the study, and a consultant to tobacco prevention agencies and policy research projects in the United States, Canada, Britain, and other countries.

“First, the provincial rating systems allow many of the U.S. studio films with the most smoking—R-rated in the U.S.—to be dumped into the Canadian youth market, spiking youth tobacco exposure. Second, scores of U.S. studio films with smoking, accessible to young people, are actually being paid for by Canada’s taxpayers through generous production tax credits.”

Because so many R-rated films are re-rated 14A or PG when they cross the border, Canadian youth can watch more than two-thirds of such movies while American youth see fewer than half. A 14A rating means that under 14-year-olds of age must be accompanied by an adult.

Every dollar in film subsidies granted by the federal and provincial governments—which totaled a quarter of a billion dollars over the past five years—ultimately costs Canada $1.62 in tobacco-related medical care and productivity loss, the study said.

Although incidences of people smoking in movies have been falling since 2005 when they reached a peak, health organizations in both Canada and the United States want the rating systems changed.

These groups, among several others, have consistently called for steps to substantially and permanently reduce young people’s exposure. The U.S. film industry, however, has been reluctant to change its self-administered rating system to apply an adult rating to new films with tobacco content.

The same day the Canadian study was released on Aug. 19, the U.S. Centers for Disease Control and Prevention (CDC) released their own report focusing on the amount of smoking in major motion pictures over the past 18 years.

The report found that while 2009 was the first year that a majority of all films were smoke-free, theatre audiences were still exposed to 17 billion “smoking impressions” in that year alone.

Just over half (54 percent) of PG-13 films featured tobacco imagery in 2009, including tobacco brand display.

The CDC said an R rating would not only substantially reduce the likelihood of an adolescent seeing a film with smoking, but would also create an economic incentive for producers to leave smoking out of films that are marketed to youth.

A couple of drags on a cigarette by Sigourney Weaver in “Avatar” earned the movie a “black lung” by Scenesmoker.org, which rates films based on the smoking incidents they contain.

“Avatar” director James Cameron has said that while smoking is “is a filthy habit which I don’t support,” he told Cinema Blend that smoking has its place in movies.

“I don’t believe in the dogmatic idea that no one in a movie should smoke. Movies should reflect reality. If it’s OK for people to lie, cheat, steal, and kill in PG-13 movies, why impose an inconsistent morality when it comes to smoking?”

Cameron added however that he agrees “young role-model characters should not smoke in movies, especially in a way which suggests that it makes them cooler or more accepted by their peers.”

With the release of the Canadian study, the Youth Advocacy Training Institute (YATI), a youth arm of the Canadian Lung Association, is also asking the film industry to cut smoking scenes from youth-rated films.

“We pay good money to see movies and shouldn’t be manipulated by the tobacco industry’s product placement,” Mimosa Kabir, a member of YATI, said in a press release.

“The film industry and government need to better protect children and youth against glamorous celebrity smoking with the same vigilance as other R-rated content.”

Studies show that most smokers take up the habit in their teens. About 15 percent of Canadian youth between 15 and 19 smoke daily, according to Physicians for a Smoke-Free Canada.