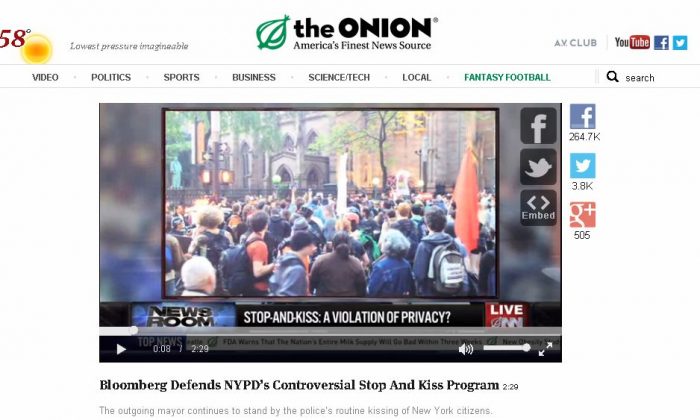 A screenshot of "The Onion" shows the satire about the NYPD's "Stop and Kiss" program.
Tech

The Onion is a satire news organization started in the late 1980s. None of the stories it publishes are real, but it continues to fool many.

“The outgoing mayor continues to stand by the police’s routine kissing of New York citizens,” reads the description of the Onion video.

The story was pointing fun at the NYPD’s “stop and frisk” policy that has many up in arms–saying it violates the privacy of people who are subjected to the procedure.

The Onion goes even further, interviewing people who were “stopped and kissed” by officers, and it even included a discussion among pundits later.

“This is what post-9/11 police work looks like. Honestly, if we could kiss everyone in New York City, we would,” commissioner Ray Kelly was quoted as saying in the satire article.

“What the hell is going on Police Officers kissing people… what has become of the department… I am glad I retired !!!!!!” wrote one Facebook user on The Onion’s page.

Another wrote: “Since when?What’s the reason behind this anyway?!”

Said another: “This story cannot be true…why would they do this?”

One wrote: “im really confused about the NYPD stop and kiss program………”

Many of the The Onion’s stories have confused people in the past. This summer, after George Zimmerman was acquitted in the shooting death of teenager Trayvon Martin, it published a story saying he won the lottery. Twitter users were fooled then as well.

But as one Facebook user put it, “without people who think the Onion is real, half the fun would just melt away.”