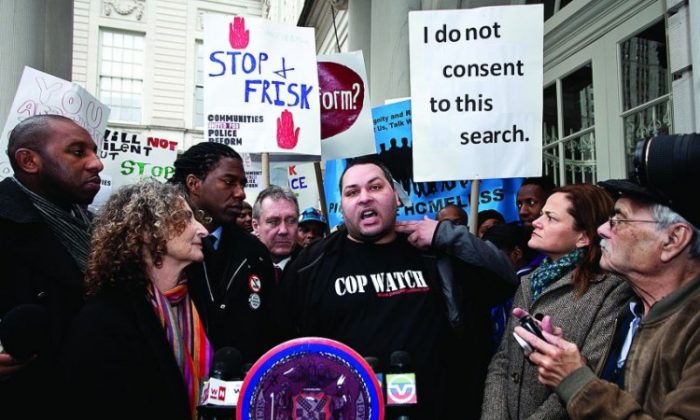 Steve Kohut of Communities United for Police Reform in February gestures as he recalls being subjected to a stop-and-frisk. (Amal Chen/The Epoch Times)
US

The ruling will allow all persons unlawfully stopped and frisked since January 2005 to be plaintiffs in the lawsuit.

“We respectfully disagree with the decision and are reviewing our legal options,” the city law office said in a statement.

The court order states that frisk stops have been increasing drastically over the past decade. The NYPD reported 150,000 stops in 1988, which increased to 685,724 stops in 2011.

Judge Scheindlin stated that “Suspicionless stops should never occur,” and the widespread of practice of it is a “troubling apathy toward New Yorkers’ most fundamental constitutional rights.”

According to the order, it is “hotly contested” whether the NYPD is unlawfully setting a performance quota for the number of arrests or stops officers need to make.

Based on New York’s Labor Law, it is illegal for the NYPD to penalize its officers for failing to meet a summons, arrest, or stop quota.