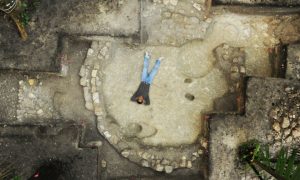 Archaeologists have discovered a well-preserved Maya stela—a stone tablet—from the site of El Achiotal that dates to the fifth century.

“This stela portrays an early king during one of the more poorly understood periods of ancient Maya history,” says Marcello A. Canuto, director of the Middle American Research Institute at Tulane University and co-director of the excavations at El Achiotal.

Canuto and other researchers with the La Corona Regional Archaeological Project in Guatemala discovered the second known reference to the so-called “end date” of the Maya calendar in 2012.

Researchers including graduate student Luke Auld-Thomas uncovered a shrine built by the ancient Maya that contained fragments of the broken stela. Epigrapher David Stuart of the University of Texas at Austin estimates the stela’s date to be Nov. 22, A.D. 418, a time of great political upheaval in the central Maya area.

Two more hieroglyphic panels in nearly pristine states were also found. “They even have much of the original sparkling red paint preserved,” Canuto says.

Tulane graduate student Maxime Lamoureux St-Hilaire discovered the panels in his excavations of La Corona’s palace. The panels had not been found by looters because they were installed in a small, unassuming corner room of the palace. The panel inscriptions tell of rituals of kingly accession.

“The fact that the stela and these panels were preserved by the ancient Maya themselves long after they were first carved adds a new wrinkle to our interpretation of how much the ancient Maya valued and strove to preserve their own history,” Canuto says.

This article was originally published by Tulane University. Republished via Futurity.org under Creative Commons License 4.0.