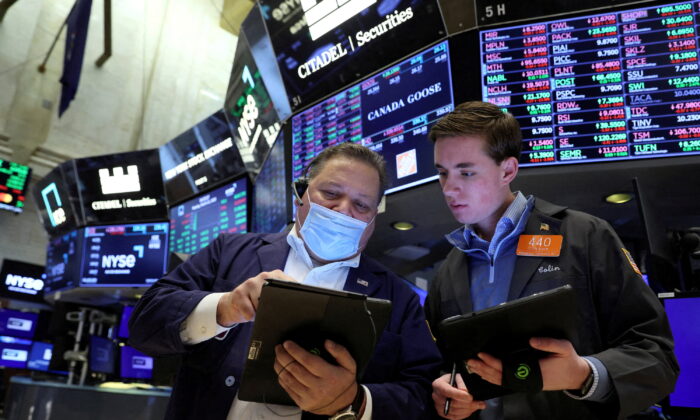 NEW YORK—U.S. stocks fell broadly Friday and pulled major indexes into the red for the week as Wall Street focused on the downside of the U.S. jobs market.

A report showed employers hired more workers last month than economists expected. While that’s a good sign for the economy amid worries about a possible recession, many investors saw it keeping the Federal Reserve on its path to hiking interest rates aggressively. Such moves would slow the economy in hopes of ultimately knocking down high inflation, and the Fed risks causing a recession if it moves too quickly or too far. In the meantime, higher interest rates put downward pressure on stocks and other investments.

The S&P 500 index fell 68.28 points, or 1.6 percent, to 4,108.54. It’s a reversal from Thursday’s market movements, when a narrower report on the U.S. jobs market came in weaker than expected. That bolstered speculation the Fed may consider a pause in raising rates later this year, and the hopes for a less-aggressive Fed sent stocks jumping.

The slide on Friday also dragged the benchmark S&P 500 into its eighth weekly loss in the last nine. The outlier in that stretch was last week, when stocks roared in part on speculation that the Fed would consider a pause in rate hikes in September.

Bitcoin also fell, while a measure of worry in the stock market rose, even though some glass-half-full signals for inflationary pressures were buried within the jobs data.

Friday’s comprehensive report from the U.S. government showed employers added 390,000 jobs last month, better than expectations for 322,500. That sent Treasury yields climbing, though they initially wobbled as investors moved from one knee-jerk reaction to another following the report’s release.

The report did contain some signals analysts said could ultimately get the Fed to be less aggressive, and the mixed data could lead markets to swing through Friday. Big daily reversals have become the norm recently as Wall Street struggles to handicap how aggressive the Fed will be.

Average wages for workers were a touch weaker in May than economists expected. While that’s discouraging for people watching prices at the grocery store and gasoline pump jump more than their paychecks, it could mean less future pressure on inflation across the economy. Plus, the nation’s job growth decelerated last month, even if it was better than expectations.

“The employment situation remains solid for the economy, but there are some signs of slowing,” said Brian Jacobsen, senior investment strategist at Allspring Global Investments. “The signs aren’t clear and convincing enough to suggest the Fed needs to pause yet, but a lot can change over the next few months.”

More than four out of five stocks in the S&P 500 fell amid the worries about rising rates, with the heaviest losses hitting technology stocks and other big winners of the prior low-rate world.

Tesla tumbled 9.2 percent after U.S. safety regulators said more than 750 owners have complained about cars suddenly stopping on roadways for no apparent reason while operating on thier partially automated driving systems. A report also said Tesla is considering layoffs amid concerns by its CEO, Elon Musk, about the economy. Because Tesla is the fifth-biggest company in the S&P 500, its movements carry a heavier weight on the index.

Companies from Walmart to Delta Air Lines have recently warned how inflation is eating into their profits, which has upped the pressure on markets because stock prices tend to track profits over the long term. The warnings are layering on top of the market’s worries about Russia’s invasion of Ukraine and about business-slowing, zero-COVID measures in China.

JPMorgan Chase’s CEO, Jamie Dimon, said earlier this week that he’s preparing his company for a possible economic “hurricane,” highlighting less economic support from the U.S. government and Federal Reserve, as well as the war in Ukraine.