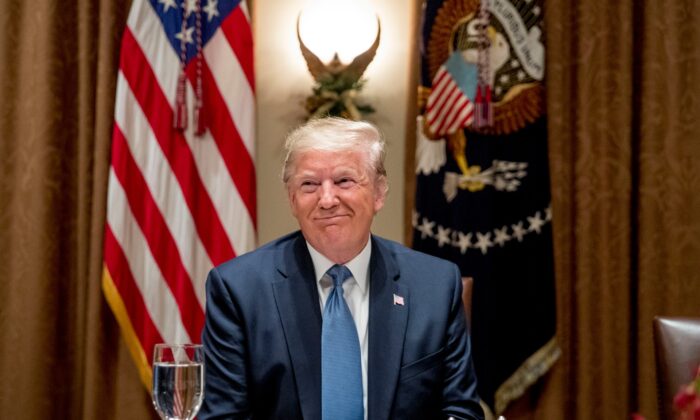 President Donald Trump at a luncheon with members of the United Nations Security Council in the Cabinet Room at the White House in Washington, on Dec. 5, 2019. (AP Photo/Andrew Harnik)
China-US News

Stocks Rise After Trump Says Trade Talks Are ‘Moving Along’

Trump said on Dec. 5 that trade talks are “moving along very well,” adding that he would “have to see” about whether or not to impose additional tariffs on China. A 15 percent tariff on about $156 billion worth of Chinese consumer goods is set to take effect on Dec. 15.

He said that the two sides are “having very good discussions.”

China said on Friday that it will waive import tariffs on some soybeans and pork shipments from the United States, according to a statement from the Customs Tariff Commission of the State Council. Waivers would be based on applications by individual firms seeking to import the products, it added.

Tariffs on U.S. soy are currently at 33 percent and pork up to 72 percent.

China has been sourcing pork from overseas to fill its domestic supply as the country grapples with a months-long outbreak of African swine fever. Pork herds in the country have shrunk by over 40 percent compared to September last year, while prices for pork and other consumer goods have inflated to record highs.

The nation’s demand for pork is set to rise still higher with the Lunar New Year holiday just two months away, which is also the peak consumer spending period. U.S. pork exports to China and Hong Kong have increased by 132 percent in volume from January to October compared to the same period the previous year, according to U.S. Meat Export Federation.

Gao Feng, the spokesperson for China’s commerce ministry, said on Dec. 5 that the two trade teams have “kept in close contact” without elaborating. He said that the Chinese side expected a tariff reduction “if the two sides reach a phase one trade deal.”

Talking to reporters at the White House on Friday morning, Larry Kudlow, director of the National Economic Council,  said that he didn’t want to “make any forecasts about any dates” when it comes to the trade agreement.

“We’re just going to just take that a day at a time. Talks around the clock right now,” Kudlow said, adding that the two sides are “close,” but “not quite there yet.”

“There’s no arbitrary deadlines, there never has been,” he continued.

Kudlow was similarly vague about whether the new tariffs will take place as scheduled in less than two weeks, saying that he would not “make any predictions.”

“I’m just saying keep an eye on it,” he said. “But that is out there and it could happen if the deal is not completed by December 15. I’m not saying as a forecast.”

U.S. Treasury Secretary Steven Mnuchin on Thursday said that deputy-level negotiators from both sides held a call that evening, and that they were “actively working” toward a deal.

The Labor Department released a stronger than expected employment report on Friday, with 266,000 new jobs added in November and the unemployment rate falling to 3.5 percent.

“America is working … Not only is America working, America is getting paid after taxes,” Kudlow said.

He also expressed appreciation for the tariffs waiver from Beijing, calling it “good mood music.”

Chinese leader Xi Jinping would “rather continue to discuss and negotiate with President Trump,” he said citing an unnamed American statesman who recently came back from a visit to China.