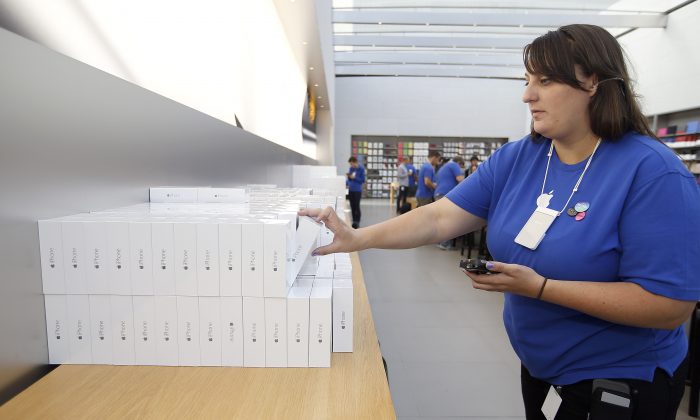 An Apple employee grabs an iPhone 6 for a customer at the Apple Store during the launch and sale of the new iPhone 6 and 6 Plus smartphones, in Palo Alto, Calif., on Sept. 19, 2014. Apple on Monday, Oct. 20, 2014 said it sold 39.3 million iPhones in the last quarter, or 16 percent more than a year ago, which is a record for the quarter. That’s partly due to excitement over new iPhone 6 and 6 Plus models that Apple began selling last month. (AP Photo/Tony Avelar)
Business

Investors rallied behind an encouraging report on the Chinese economy as well as strong quarterly results from Apple and other big companies.

The market continues on its recovery from last week’s swoon and has now erased much of its losses over the last two weeks.

“I think it’s too early to call to call this a new rally, but I think there are definite signs that investors are gaining confidence again after last week’s volatility,” said Kristina Hooper, head of U.S. investment strategies at Allianz Global Investors.

This week so far has been a contrast to last week’s turbulence in many ways. Volatility is down, the S&P 500 index is on pace to have its best week of the year and the price of crude oil has stopped sliding. The bond market has also stabilized, with the 10-year Treasury note remaining around 2.20 percent for the last several days.

“Last week the main thing driving the market was the decline in oil, the Ebola scare and the rally in the 10-year Treasury note. All of those items have stabilized,” said Ian Winer, director of equity trading at Wedbush Securities.

That said, there’s still a chance for bumps ahead given that a meeting of the Federal Reserve is coming up next week where the central bank is expected to end its bond-buying economic stimulus program for good. Growth worries in Europe and China are still top of mind, and with U.S. corporate earnings season underway, the market’s direction could change quickly, traders and strategists said.

“Investors are likely to see more volatility, not less. We expected this to happen now that the Fed’s quantitative easing program is ending,” Hooper said. “We are in unusual times, so expect to see more of an outsized reaction in the market.”

Since falling to a six-month low last week, the stock market has now basically recovered nearly all of its losses. After closing at 1,862.49 on Oct. 15, the S&P 500 index has rallied more than 4 percent in four days.

One notable part of the market investors have been moving back into is smaller, riskier companies. While the S&P 500 and Dow are still down 1.6 percent to 2.5 percent this month, respectively, the Russell 2000 is up 1 percent for October.

“That’s an important sign that investors are regaining their confidence,” Hooper said.

Apple gave a boost to the overall market. The maker of iPhones and iPads rose $2.71, or 2.7 percent, to $102.47 after its quarterly results easily beat analysts’ expectations. Apple said it earned $1.42 a share last quarter, helped by strong sales of the latest version of the iPhone.

Investors also had an encouraging report out of Asia. China’s economy expanded by 7.3 percent in the third quarter from a year earlier. Although growth slowed slightly from the previous quarter’s 7.5 percent, analysts had expected a more marked slowdown, to 6.9 percent.

China has been a worry spot for investors for many weeks, and has been a key reason why financial markets have been volatile lately. Signs of a slowdown in Europe have also been worrying investors.

In commodities, oil prices were rising after weeks of declines. Crude gained as the better-than-expected economic data from China suggested higher global demand for oil. Benchmark U.S. crude rose 10 cents to close at $82.81 a barrel on the New York Mercantile Exchange. Brent crude, a benchmark for international oils used by many U.S. refineries, rose 82 cents to close at $86.22 on the ICE Futures exchange in London.

The recovery in oil prices helped send energy stocks higher. The energy sector in the S&P 500 jumped 2.9 percent Tuesday, by far the biggest gain of the 10 sectors in the index.