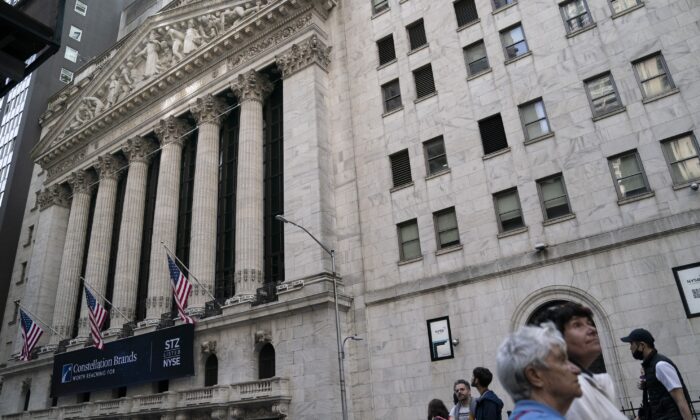 Pedestrians pass the New York Stock Exchange in the Manhattan borough of New York, on May 5, 2022. (John Minchillo/AP Photo)
Stocks

NEW YORK—U.S. stocks rallied Tuesday as Treasury yields eased, but Wall Street remains wobbly as investors wait for more clarity on where interest rates, inflation and the economy are heading.

Gains by Apple, Microsoft, and other technology stocks were some of the biggest forces lifting the market. They benefited from a drop in Treasury yields, with the 10-year yield falling back below 3 percent. Lower yields in recent years have emboldened investors to pay higher prices for stocks, particularly companies that are growing quickly.

Stocks of energy producers also jumped as oil prices rose to roughly $120 per barrel, up more than 55 percent for the year so far. Exxon Mobil climbed 4.6 percent, and ConocoPhillips added 4.5 percent.

Wall Street started the day pessimistic, and stocks initially fell after Target warned of lower profit margins as it slashes prices to clear out inventory. The retail giant sank 2.3 percent after it announced moves it said were needed to keep up with customers’ changing behaviors. Across the country, shoppers are spending more at restaurants and on travel than on sprucing up their homes as they did earlier in the pandemic.

Other retailers got caught in the downdraft, and Walmart fell 1.2 percent.

Worries were also stoked by the World Bank sharply cutting its forecast for economic growth this year. It pointed to Russia’s war against Ukraine and the prospect of widespread food shortages, raising the potential return of “ stagflation,” a toxic mix of high inflation and sluggish growth unseen for more than four decades.

The economy’s fragility has been atop Wall Street’s mind this year amid worries about interest-rate hikes coming from the Federal Reserve. The central bank is moving aggressively to stamp out the worst inflation in decades, but it risks choking off the economy if it moves too far or too quickly.

The Fed is widely expected to raise its key short-term interest rate by half a percentage point at its meeting next week. That would be the second straight increase of double the usual amount, and investors expect a third in July.

The Fed is not alone in reining in the massive support thrown at the economy and financial markets during the pandemic. Australia’s central bank surprised investors Tuesday by raising interest rates by half a percentage point.

Even if central banks pull off the delicate act of slowing the economy enough to halt inflation but not so much as to cause a recession, markets face other challenges.

“Rising rates and slowing growth are not a supportive environment for investors, so it is unlikely that equity or fixed income returns will match the stimulus-fueled returns of the past two years,” Gargi Chaudhuri, head of iShares investment strategy, Americas, said in a report. She said she thinks the U.S. will avoid a recession.

Treasury yields have largely climbed through this year with expectations for a more aggressive Fed. They moderated a bit on Tuesday, though.

The yield on the 10-year Treasury fell back to 2.98 percent from 3.03 percent late Monday. The two-year yield, which more closely tracks expectations for Fed action, dipped more modestly to 2.72 percent from 2.73 percent.

Markets could remain erratic until more clarity emerges over inflation and the economy. The next big update on inflation arrives Friday, when the U.S. government releases its latest reading on the consumer price index.