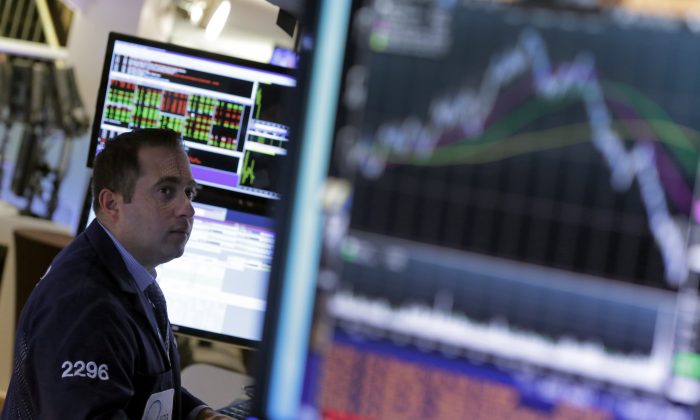 A specialist works at his post on the floor of the New York Stock Exchange Wednesday, Oct. 22, 2014. Stocks are opening mixed as investors look over earnings reports from US companies. (AP Photo/Richard Drew)
Business & Markets

NEW YORK—Stocks fell in late afternoon trading on Wednesday, a day after the Standard & Poor’s 500 index had its biggest gain of the year. That broad index is on track to end four days of gains after a stretch of tumultuous trading in recent weeks.

THE QUOTE: “The market is still nervous,” said John Manley, chief equity strategist at Wells Fargo Funds Management. “The extreme volatility of the last few weeks is on our minds.”

YAHOO SURGE: Yahoo jumped $2.14, or 5 percent, to $42.32 after reporting encouraging third-quarter results late Tuesday. Yahoo got a windfall from the recent IPO of Alibaba, the giant Chinese online retailer that Yahoo owns a stake in. Revenue rose slightly from the previous year, a welcome change for a company that has been posting quarterly declines for most of the past five years.

DRUG TROUBLES: Shares of Biogen Idec dropped 4 percent despite a strong quarter. The drug company said a patient who took its newest multiple sclerosis drug suffered a brain inflammation and later died. The stock dropped $14.25 to $312.52.

CHEAP OR EXPENSIVE?: Stocks may be neither. With about a fifth of S&P 500 companies out with earnings in past quarter and outlooks for future ones, stocks look reasonably priced compared to expectations for future earnings. The index is trading at 15.8 times expected earnings per share over the next 12 months, according to S&P Capital IQ, a research firm. That is not much lower— meaning cheaper —than the average of 16.4 since 2001.

But other measures, comparing stock prices to earnings over the past 10 years, for instance, suggest the market may be overvalued.

Investors will get a clearer view tomorrow, a big day for earnings across industries. Those reporting include Microsoft, 3M, Amazon.com, Caterpillar and United Continental.

“The market is taking a bit of breather,” said TD Ameritrade Chief Strategist JJ Kinahan. “People are reassessing what their expectations should be for the rest of the earnings season.”

LOW INFLATION: The government reported that consumer prices rose 1.7 percent in the year to September, below the 2 percent target set by the Federal Reserve. Low inflation has allowed the central bank to keep rates at record lows to help the economy by encouraging lending and hiring.

“Energy prices are pretty low and wages have stayed pretty flat. You look at that, and GDP growing pretty healthily, and there are too many good things. The market should push through this.”

EUROPE STIMULUS: As Europe teeters on the brink of recession again, speculation is growing that the European Central Bank will step up its purchases of bonds, which puts downward pressure on interest rates. Analysts say the ECB is believed to be buying Italian bonds and might be planning to expand that program to other nations.