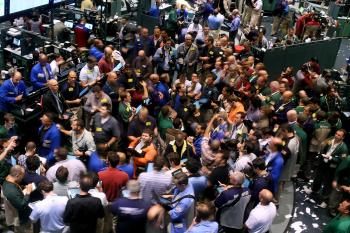 The US stock market tumbled on Thursday after the Department of Labor announced Thursday that initial claims for unemployment benefit rose to 479,000 last week. (Spencer Platt/Getty Images)
Business & Economy

Antonio Perez
View profile
Follow
biggersmaller
Print
NEW YORK—The US. stock markets tumbled on Thursday after a promising start to the month as investors were hit with a surprising report that first-time claims for unemployment benefit unexpectedly rose last week, calling into question the sustainability of the economic rebound.

The U.S. Department of Labor announced Thursday that initial claims for unemployment benefit rose to 479,000 last week, a 19,000 increase from the prior week—a figure that was worse than the consensus economists’ expectations.

High unemployment has become the biggest worry for investors and economists as a major portion of the U.S. economy is driven by consumer spending activities. The Dow Jones Industrial Average dropped 6 points, or 0.05 percent in Thursday trading. The S&P 500 Index likely dropped 1 point, and the technology-heavy Nasdaq Composite Index declined 11 points.

On Wednesday, payroll outsourcing firm ADP announced that private sector employers added jobs last month. Investors will be closely watching on Friday, when the government releases its monthly report on jobs and the unemployment rate for July. The government’s report is broader and includes employment in the public sector.

Late last month, the National League of Cities, the United Conference of Mayors, and the National Association of Counties forecasted that almost 500,000 state and local government jobs may be lost by 2011 as municipalities are forced to rein in spending and cut budgets.

Given the high unemployment rate in the United States, it was not a surprise that U.S. retailers reported flat sales last month, even as the usually robust back-to-school shopping season officially kicked off.

According to market research firm Thomson-Reuters, sales at the nation’s 28 largest retail companies rose at a tepid 2.9 percent clip last month compared to July 2009, when the economy was still mired in a deep recession. More than 60 percent of retail stores surveyed missed expected sales figures.