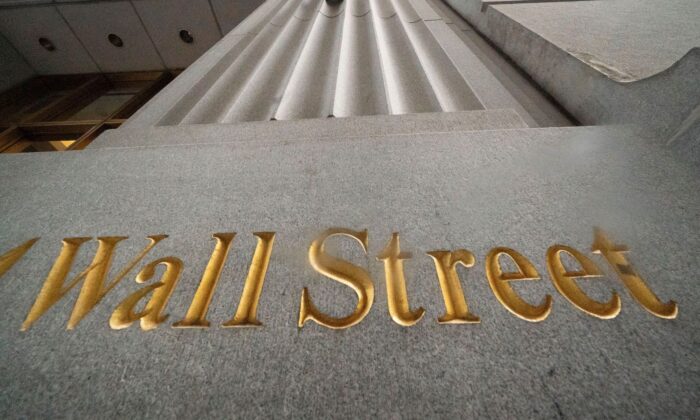 A sign for Wall Street is carved in the side of a building in New York, on Nov. 5, 2020. (Mark Lennihan/AP Photo)
Markets

Stocks fell in morning trading on Wall Street Wednesday as the broader market takes a choppy turn amid lingering concerns about rising inflation.

A mix of health care companies and companies that rely on direct consumer spending held up better than the rest of the market.

Major indexes have been choppy as investors shift focus following several weeks of solid corporate earnings. A series of worrisome reports on inflation tripped up stocks last week and the broader market has been swaying between gains and losses so far this week.

Retails sales reports and earnings are being closely watched by investors as they try to gauge just how much rising inflation is impacting business operations and consumer spending. Many companies have warned that profit margins could suffer as they face supply chain problems and higher costs overall. Consumers have been absorbing higher prices on a wide range of goods and that has investors worried about the potential for a pullback in spending.

Macy’s will report its latest financial results on Thursday.

Investors received a mixed report on the housing market. Construction of new homes in the United States fell 0.7 percent in October, but a big jump in the number of permits last month points to anticipation by builders that supply chain problems that have dogged them for much of the year will soon ease. Homebuilders were mixed following the report.