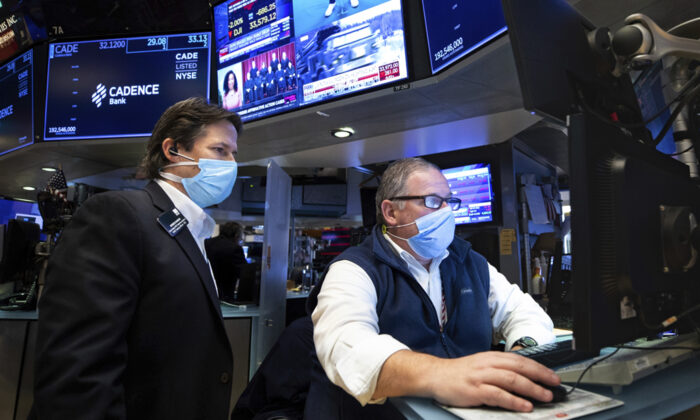 Stocks End Lower on Wall Street After Another Volatile Day

Another volatile bout of trading on Wall Street ended with a broad pullback for stocks Tuesday, as investors grapple with economic red flags and uncertainty over how aggressive the Federal Reserve will be in fighting rising inflation.

Stock indexes fell sharply to start the day, then came well off their lows by late afternoon. Another burst of selling in the final hour of trading pulled them lower again. Technology stocks were the biggest drag on the market.

The S&P 500 fell 1.2 percent after having been down as much as 2.8 percent. The benchmark index has been falling steadily all month and is now down 9.2 percent from the all-time high it set Jan. 3. The Dow Jones Industrial Average slipped 0.2 percent and the tech-heavy Nasdaq gave up 2.3 percent.

Higher inflation has been squeezing businesses and consumers, and the Federal Reserve is expected to combat it in 2022 by raising interest rates. Investors fear that the Fed could either be moving too late or could be too aggressive. The central bank issues its latest policy statement Wednesday.

The virus pandemic still hovers over the economy and threatens to crimp progress with every new wave. The International Monetary Fund cited the Omicron variant as the reason it has downgraded its forecast for global economic growth this year.

And a potential conflict between Russia and Ukraine threatens to push energy prices even higher while forcing more countries to focus on fighting a war instead of inflation and COVID-19.

Wall Street is dealing with signs of slowing economic growth because of COVID-19 and a Fed that can’t really go back on what it said it would do, said Barry Bannister, chief equity strategist at Stifel.

“The market has come to terms with that and that’s a big deal,” he said. “Fiscal and monetary tightening, together, is tough on financial assets when they’re coming off of a rip-roaring party from stimulus.”

Still, the fact that the major stock indexes came off their lows of the day could be a sign that some investors are betting that a dimmer outlook for economic growth may prompt the Fed to take a more measured approach to raising interest rates.

“Weaker economic growth projections have contributed to investors breathing a sigh of relief that the Fed won’t have to be overly aggressive,” said Sam Stovall, chief investment strategist at CFRA.

The S&P 500 fell 53.68 points to 4,356.45. This week, the index has come within striking distance of entering a “correction,” which among markets watchers means a drop of 10 percent from a peak.

Major indexes had a similar start to trading on Monday and were down most of the day before a late buying spree pushed them to a higher close. That rebound may have been just a “head fake,” Bannister said, adding that more declines are likely in store for the market.

Even though the S&P 500 managed to eke out a gain after its roller-coaster ride on Monday, a measure of nervousness on Wall Street known as the VIX index remained high. That suggests stress is continuing to grow in the system, with markets in a “high speed spin cycle,” strategists at UBS wrote in a report.

Futures contracts related to the VIX, meanwhile, indicate investors are preparing for a high level of volatility in the near term but less in ensuing months. That’s a flip from their typical behavior last year.

American Express surged 8.9 percent for the biggest gain in the S&P 500 after the credit card company reported that its fourth-quarter earnings rose 20 percent from a year earlier.

Bond yields rose. The yield on the 10-year Treasury rose to 1.78 percent from 1.74 percent late Monday.