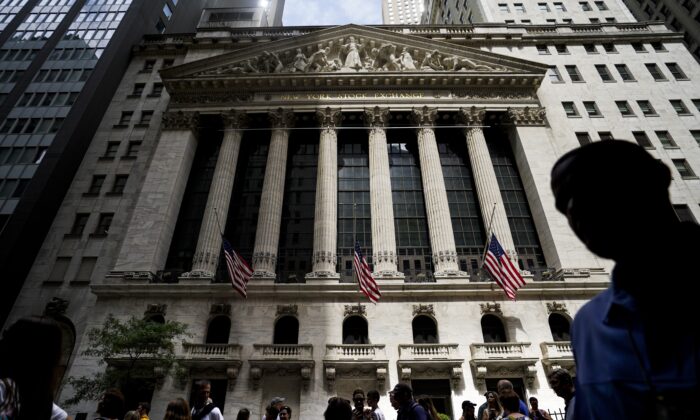 Stocks capped another shaky day on Wall Street with more losses Wednesday, after a highly anticipated report on inflation turned out to be even worse than expected.

The S&P 500 ended 0.4 percent lower, its fourth consecutive drop, after tumbling as much as 1.6 percent earlier. The Dow Jones Industrial Average fell 0.7 percent, while the Nasdaq composite dropped 0.2 percent, erasing nearly all of an early 2.1 percent loss.

Markets took a few U-turns through the morning, as has become the norm on Wall Street this tumultuous year. They were following the lead of Treasury yields in the bond market, which initially surged on expectations that Federal Reserve policymakers will hike interest rates drastically to slow the nation’s skyrocketing inflation.

“They seem to have a green light to raise interest rates with the labor market still in very good shape and inflation remaining well above where they want it to be,” said Tom Hainlin, national investment strategist at U.S. Bank Wealth Management.

Inflation and the Federal Reserve’s response to it have been at the center of Wall Street’s sell off this year. Wednesday’s discouraging data showed that inflation is not only still very high, it’s getting worse.

Prices at the consumer level were 9.1 percent higher last month than a year earlier, accelerating from May’s 8.6 percent inflation level. That was also worse than economists’ expectations for 8.8 percent.

The Fed’s main tool to combat inflation is to raise short-term interest rates, which it has already done three times this year. After Wednesday’s inflation report, traders now see it as a lock that the Federal Reserve will hike its key interest rate by at least three-quarters of a percentage point at its next meeting in two weeks.

That would match its most recent increase, which was the biggest since 1994. A growing number of traders are even suggesting the Fed will go for a monster hike of a full percentage point.

The latest inflation data “certainly creates more certainty that the Fed is going to be pretty aggressive in the July meeting,” Hainlin said.

Traders are betting on a 67.8 percent chance of a full-point hike, up from zero a month ago, according to CME Group.

The risk is that rate hikes are a notoriously blunt tool, one that takes a long time for the full effects to be felt. If the Fed ends up too aggressive with them, it could cause a recession. In the meantime, higher rates push down on prices of all kinds of investments.

“Shock and awe from the Fed might cause a lot of collateral damage to the economy without really providing near-term inflation relief,” said Brian Jacobsen, senior investment strategist at Allspring Global Investments.

“The Fed probably needs to temper people’s expectations about what they can do,” he said.

In the bond market, the two-year Treasury yield rose to 3.13 percent from 3.05 percent late Tuesday. It tends to follow expectations for Fed action, and it got as high as 3.22 percent immediately after the release of the inflation report.

It remains higher than the 10-year yield, which fell to 2.91 percent, down from 2.95 percent from late Tuesday. That’s a relatively rare occurrence, and some investors see it as an ominous signal of a potential recession.

The inflation data also sent immediate jolts into stock markets across Europe and for gold, with prices for all of them weakening after the report’s release. U.S. gold for August delivery ended up settling 0.6 percent higher.

Even with the swings, Wall Street’s reaction was more muted than it was following the last report on inflation. A month ago, the reading on the consumer price index, or CPI, showed an unexpected acceleration in inflation. That dashed some hopes that inflation was peaking, and it sent the S&P 500 down 2.9 percent.

Since then, parts of the economy have already slowed as a result of inflation and the Fed’s actions combating it, particularly the housing market. Prices for oil and other commodities have also regressed as worries about a recession pull down expectations for demand.

“While some will draw parallels with the shockingly bad May CPI report, the backdrop is markedly different—commodity prices have fallen sharply and we’ve seen clearer signs of an economic slowdown, both of which will contribute to weaker price pressures ahead,” said Michael Pearce, senior U.S. economist with Capital Economics.

Or, as the chief investment officer of global fixed income at BlackRock puts it: “high prices is the cure for high prices.” High inflation is pushing households and businesses to pull back on spending, and the reduced demand should ultimately help pull down inflation, Rick Rieder wrote in a report.

Besides interest rates, which affect how much investors are willing to pay for stocks, investors this week are also getting updates on the other big factor that sets prices on Wall Street: how much profit companies are making.

Delta Air Lines fell 5 percent after it reported weaker profit for the spring than analysts expected. High prices for jet fuel and a spate of canceled flights in May and June dragged on its results.

Big banks and financial companies are coming up next, as the reporting season gets going for profits made from April through June.

Banks and other financial companies were some of the worst market performers Wednesday, dragged down by worries about the economy. They also get hurt when short-term interest rates are higher than long-term rates, which upends their business of borrowing at short-term rates and lending at long-term rates to profit on the difference.