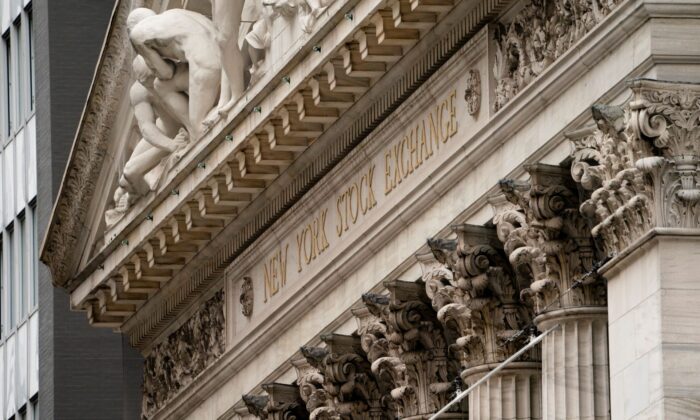 Stocks on Wall Street shed early gains and closed broadly lower Monday as the United States moved to close its embassy in Ukraine amid heightened tensions over the thousands of Russian troops that have been amassing on the border.

The S&P 500 fell 0.4 percent after having been down as much as 1.2 percent shortly after the United States said it is closing its embassy in Ukraine and moving all remaining staffers there to a city near the Polish border. The move comes as diplomatic efforts continued Monday in a bid to head off what U.S. officials have warned could be an imminent Russian attack on Ukraine.

Bond yields rose broadly, as did energy futures and the price of gold.

The Dow Jones Industrial Average fell 0.5 percent and the Nasdaq composite ended essentially flat after having been up 1 percent in the early going. The three major stock indexes were coming off a weekly loss.

The market slide adds to losses from a late-afternoon sell-off on Friday after the White House told Americans to leave Ukraine within 48 hours over concerns that Russia could invade that country soon. Other governments including Russia pulled diplomats and their citizens out of the country.

Wall Street is also trying to gauge how stocks and the broader economy will be affected from another source of uncertainty: How far and how quickly the Federal Reserve will move to raise interest rates to quash surging inflation.

“The market is really paying attention to geopolitical stuff right now, whether it’s stuff out of Ukraine or in D.C. with respect to what the Fed is going to do,” said Willie Delwiche, investment strategist at All Star Charts. “The bigger story is inflation and rates. The Fed is catching up to inflation, the bond market is now taking the Fed seriously and the question is ‘what do U.S. stocks do in that environment?”

The S&P 500 fell 16.97 points to 4,401.67. Nearly 80 percent of the stocks in the benchmark index fell. Financial, health care and energy companies were among the biggest weights on the market. Citigroup fell 1 percent, Moderna slid 11.7 percent and Exxon Mobil dropped 1.5 percent.

A potential escalation of the conflict between Russia and Ukraine also weighed heavily on European markets, which fell sharply.

Nations are still searching for a diplomatic solution to the situation and Russia’s top diplomat advised Russian President Vladimir Putin to continue a dialogue with the United States and its allies.

The price of gold, traditionally a safe haven during geopolitical uncertainty, rose 1.5 percent.

The crisis in Ukraine is yet another concern for investors as they try to figure out how rising inflation and looming interest rate hikes will impact investments and the economy. Inflation stands at a four-decade high and the Federal Reserve is planning to raise interest rates to help cool inflation.

The central bank is expected to start raising its benchmark interest rate in March and Wall Street expects as many as seven rate hikes this year.

While Fed policymakers agree the central bank should begin raising interest rates next month, they differ on how quickly to do so. On Monday, James Bullard, president of the Federal Reserve Bank of St. Louis, repeated his call for the Fed to take the aggressive step of raising its benchmark short-term rate by a full percentage point by July 1. Esther George, president of the Kansas City Fed, expressed support for a more “gradual” approach. And Mary Daly of the San Francisco Fed declined to commit herself to more than a modest rate hike next month.

Their comments follow last week’s report that inflation jumped 7.5 percent in January from a year ago, the fastest increase in four decades. Prices also rose 0.6 percent from December to January, the same as the previous month, suggesting that price gains still aren’t slowing, as many economists and Fed officials have hoped.

The Fed typically responds to high inflation by making borrowing more expensive, which slows spending and the pace of price increases.

“Last week’s inflation report kind of woke Fed officials up a little and really brought to mind that they’re behind the curve here, and by acting aggressively earlier they can maybe do less overall in terms tightening,” Delwiche said.

Investors also have their eye on the latest round of corporate earnings, in part to get a better understanding of how companies are dealing with high inflation. Some of the more notable companies reporting earnings this week include Airbnb on Tuesday, DoorDash on Wednesday, and Walmart on Thursday.