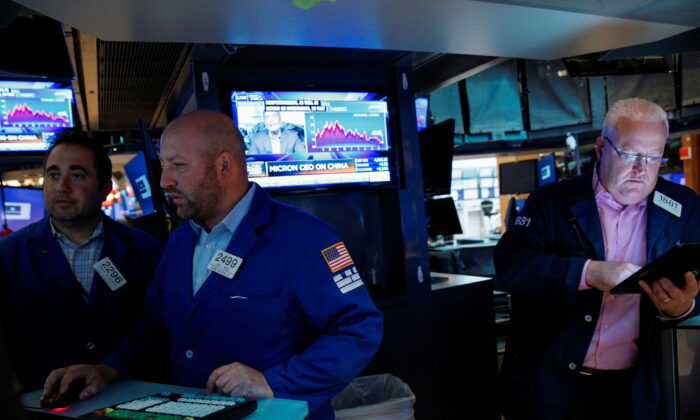 Stocks closed higher on Wall Street on Friday, but the market still ended the week lower as inflation worries weighed on investors’ moods earlier in the week.

Johnson & Johnson shares rose 1.2 percent after the company announced it would divide itself into two separate businesses. The company would split its its Band-Aids and Listerine business from its medical device and prescription drug business. It’s the second big conglomerate to break itself up this month, after General Electric announced it would also split itself into three separate companies.

Banks and energy stocks lagged the market. Bank of America slipped 1.5 percent. The KBW Bank Index of the 24 largest banks closed down 0.2 percent.

Lordstown Motors dropped nearly 18 percent after giving investors a discouraging production update, with delays stretching to the third quarter of 2022. Tesla fell 2.8 percent after CEO Elon Musk sold another chunk of his stock on following a pledge on Twitter to liquidate 10 percent of his holdings in the electric car maker.

Bond yields edged higher. The yield on the 10-year Treasury rose to 1.57 percent from 1.55 percent from late Wednesday. The bond market was closed on Thursday.

The recent winning streak for stocks, which produced a series of record highs for the major indexes, came to an end as investors shifted focus from corporate earnings to rising inflation.

Investors reviewed mostly solid corporate report cards over the last several weeks. A wide range of companies showed that they were able to successfully navigate both the summer surge of COVID-19 cases and lingering supply chain problems.

Rising inflation, though, has been a lingering concern, with companies warning that higher raw materials costs and supply chain disruptions could crimp their finances. Prices have also been rising for consumer goods and essential items, raising concerns that people could pull back on spending and hurt the economic recovery.

Those inflation concerns were further stoked this week with discouraging reports on price increases for companies and consumers. On Tuesday, the Labor Department reported that inflation at the wholesale level surged to a record high in October. On Wednesday, the agency gave Wall Street a hotter-than-expected inflation report that showed consumer prices also surged, hitting their fastest overall pace since 1990.

Outside of inflation concerns, investors are also closely watching for data that could give a clearer picture of how various parts of the economy are recovering. The Labor Department on Friday released data that showed Americans quit their jobs at a record pace for the second straight month in September. The figures point to a historic level of turmoil in the job market as newly-empowered workers quit jobs to take higher pay that is being dangled by businesses in need of help.

Wall Street will get another update on spending Tuesday when the Commerce Department releases its retail sales report for October. There are still several big companies on deck to report earnings and give investors a better sense of how the retail industry is doing. Home Depot and Walmart will report their results on Tuesday and Target will report its results on Wednesday. Macy’s will report earnings on Thursday.