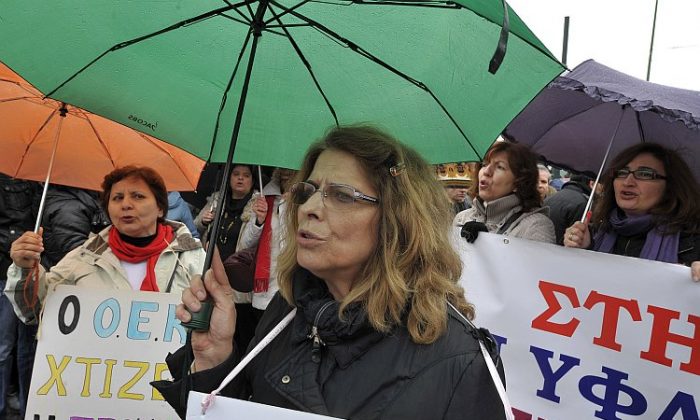 Employees of the Labor Housing Organization chant slogans in front of the Greek Parliament in Athens on Feb. 22 against the new austerity measures and the planned closure of the organization. (Louisa Gouliamaki/AFP/Getty Images)
Business

AMSTERDAM—The euro jumped last week after a Greece accord was reached, but European stocks remain under pressure.

As for economic data, eurozone consumer confidence for February is still negative at minus 20.2, but came in right on expectations.

The Purchasing Manager Index (PMI) however, disappointed quite a bit, coming in at 49.7 versus 50.5 expected. The index is based on surveys of purchasing managers at the corporate level and indicated where GDP is heading as order placed will be produced with a lag. A reading below 50 signals contraction. German IFO sentiment index is still going strong, printing 117.5 on expectations of 116.5 for the current assessment survey.

Another indicator that does not bode well for Europe is that larger companies with a market cap of more than 500 million euros ($668 million) are starting to struggle. An analysis by Credit Suisse suggests that 10 percent of said companies were losing money in Q4 2011, up from only 5 percent in Q3. As discussed previously, the relentless rise of Brent oil denominated in euros certainly has some part to play—it feeds through to companies’ profit margins like no other economic input and also hurts consumers on the disposable income side. A barrel of Brent in euro terms reached an all-time high of 93.50 euros last week.

This bad economic news, the high oil price, and a couple of disappointing quarterly profit reports might well have been the reason why the EuroStoxx came down from a high of 2,557 reached early last Tuesday to a low of 2,489 last Thursday before recovering to close at 2,523. Bad corporate performance did not affect the euro though, which rallied on news that a Greek default in March will be avoided. In fact, it rallied in an almost straight line from $ 1.31 last Monday to $ 1.35 last Friday, a 2.36 percent gain. Stocks might even be discounting a squeeze from the high exchange rate—notoriously bad for exporters—and Brent crude, while the currency only displays the immediate avoidance of a high volatility event.

Earlier last week, the Eurogroup delegation of European finance ministers finally came to an agreement that provides the framework for Greece to avoid a disorderly default. As usual, the sheer complexity of the situation leaves many questions unanswered, but judging by the reaction of the euro, markets are content for now.

Private Greek bondholders (excluding the European Central Bank) will swap their current bonds into new Greek bonds to lessen the net-present-value burden on the country by 75 percent. Greece expects a 95 percent participation rate and has reserved the right to retroactively introduce so called collective action clauses that force minority bondholders to participate. Hedge fund holdouts and holders of English bonds remain the wild card here, as there are numerous ways to sue for nuisance and derail the deal.

Charles Dallara, the lead negotiator for the International Institute of Finance (IIF), the body that represents the private bondholders, said in an interview with BBC: “There is nothing I am aware of … that will definitively stop someone who wants to take such action and there is no ironclad guarantee … that individual investors may not contemplate counterproductive activity here. They have the rights, they have the legal rights, [and] they have the market judgments to make.”

Before this deal goes through, Greece also has to make certain commitments, including further budget cuts and modifying its constitution so that debt repayments get preference in the budget.

In consequence, it is required to fund an escrow account where it has to fund the quarterly debt repayments. There will be a permanent lender task force installed in Athens and the German weekly newspaper Wirschaftswoche reported that Germany will send 160 tax collectors to Greece. Labor unions reacted with protests to such harsh measures.

On the flip side, the International Monetary Fund (IMF) and the European Union (EU) are going to fund the country through 2014, possibly injecting as much as 130 billion euros ($175 billion). The goal is to reduce the country’s debt burden to 120 percent of GDP by 2020. The Greek one-year bond yielded 763 percent on Wednesday, with investors only pricing in coupon payments and assigning very little value to principal repayment.

“It may well be the case that all current members remain in the Eurozone, and that Germany keeps on shouldering the ever-increasing debts of other countries. But the price of such a scenario is very high for all involved: southern Europe would become embroiled in permanent stagnation and the German economy would eventually be dragged down to a slower growth trajectory” said Kenneth Rogoff, a renowned Harvard Economist in an interview with German weekly Der Spiegel.

The lower house of the German parliament, the Bundestag, passed the Greek bailout package Sunday. Finland will vote on Tuesday, a country where an upset could theoretically originate as Finland previously had secured special arrangements with Greece and the True Fins party opposes the bailouts.

On Wednesday, the ECB will accept tenders for the second tranche of LTRO financing. Many whisper numbers that suggest quite a high take up in the region of 1 trillion euros ($1.3453 trillion) and the market might be disappointed if the number comes in substantially below that figure. In addition, if a certain group of banks still refuses to take up LTRO funding, then this might have wide-ranging implications.

If a bank is healthy and refuses bailout, the market will more readily provide funding to it, also because it is less dependent on the ECB while retaining the full optionality of still going to financing at a later stage. The group of banks that needs to take the money will be deemed unhealthy by the market and therefore be shunned by private investors, thereby making it even more dependent on the ECB. A two-tier banking market is thus created.