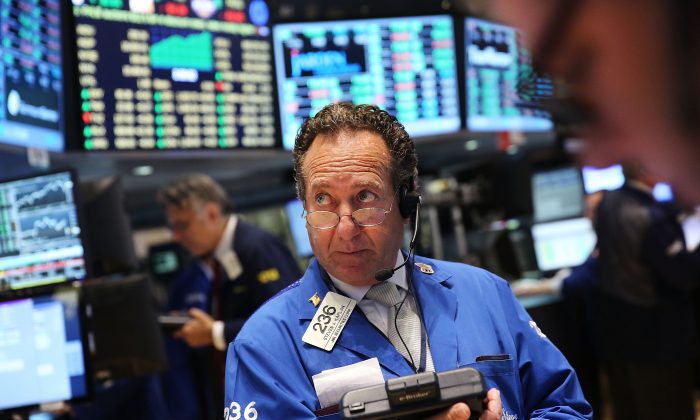 NEW YORK—Sometimes a little fear is healthy for stock investors.

Nine days ago, after a series of sharp sell-offs, the Standard & Poor’s 500 index was down 7.4 percent from its September record as fears of a global economic slowdown intensified. Stocks have surged back this week, thanks to strong corporate earnings, and on Friday the S&P 500 had its best gain in nearly two years.

How should investors view this intense flip-flop? As an overdue reminder that stocks aren’t a one-way ride up.

While last week’s slump doesn’t technically count as a correction — defined as a 10-percent drop from a peak — that’s how many professional investors view it.

“It’s important to have these periods of scare and fear,” says Joe Quinlan, chief market strategist for U.S. Trust. “It keeps investors honest and it keeps them on their toes.”

In fact, such sell-offs often provide a base for another move higher in stocks, market observers say.

That’s because a slump stops people from focusing on the upward momentum of the stock market. If prices rise with few bumps along the way, investors sometimes stop considering the fundamental drivers of the market, such as company earnings and the health of the economy, Quinlan says. Investors are also tempted to ignore a tenet of investing: Diversify. After a big drop, though, they think about putting money into other things besides stocks.

It has been more than three years since the last correction and that was making some investors hesitant to buy stocks. The average amount of time between slumps is 18 months, according to data from S&P Capital IQ. Many investors reasoned that, statistically speaking, at least, the market was due for a sell-off.

Instead, the slump was typical of a sell-off that happens in a rising market, known as a bull market, he says.

By contrast, declines of 20 percent or more, known as bear markets, tend to start with gradual sell-offs, rather than sudden swoons, Manley says.

For a deeper sell-off to happen, investors need to become complacent, or wildly enthusiastic, he says. So far, he sees little evidence of that on Wall Street. Manley expects the stock market to continue to stabilize as the U.S. economy strengthens and company earnings improve.

Some believe that the slump changed the psychology of the market. The Chicago Board Options Exchange’s volatility index, known as the VIX, or fear index, rose as high as 31 during the day on Oct. 15, but has since fallen back to 16.11. The yield on the 10-year Treasury note fell as low as 1.91 percent last week as investors snapped up safer government bonds. It now trades at 2.27 percent.

The sharp sell-off has made investors focus on risks, such as a slowdown in growth in Europe and China.

“There are cracks in the ice at this point,” said McMillan. “People are really starting to process the fact that ‘we’re pretty far up there,'” in terms of stock prices.

After a surge of nearly 30 percent last year, the S&P 500 is trading at 24.8 times its 10-year average earnings, as calculated by Nobel Prize winning economist Robert Shiller of Yale. That is much more expensive than the long-term average of 16.5. Schiller’s measure smooths out distortions caused by the business cycle.

It was also no coincidence that the slump in stocks came shortly before the Federal Reserve was due to end its economic stimulus, says Robert Pavlik, chief market strategist at Banyan Partners. The Fed is expected to end its bond-buying program this month, and to start raising interest rates by the middle of next year, its first hikes since 2006.

Pavlik points out that the market’s sell-off only started to abate when St. Louis Fed President James Bullard said that the central bank should consider putting off ending its purchases. Stocks also rallied this week on reports that the European Central Bank was considering buying corporate bonds, a move that could lower borrowing costs and revive the region’s economy.

Despite the gyrations, the S&P 500 index is trading at 1,964, slightly higher than where analysts expected it to end the year. The average forecast of five banks polled at the end of 2013 was for the index to end this year at 1,915.

History suggests that the last quarter of the year will end up being a good one for stocks. The S&P 500 has gained an average of 4.8 percent during the period over the last 15 years.

Another factor that could support stocks? Global investors are likely to start shifting more money to the U.S. because growth elsewhere remains muted. That could push up demand for U.S. assets.

“I do believe that the U.S. economy is a shiny city on top of the economic hill right now,” says Kevin Mahn, President and Chief Investment Officer of Hennion & Walsh Asset Management. “That’s where investors are finding some comfort.”