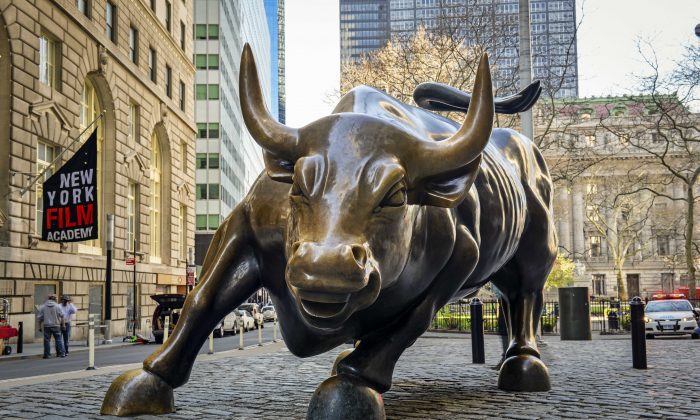 The Charging Bull statue in the Financial District of Manhattan in April 2015. (Robert Cicchetti/Shutterstock)
Business

U.S. stock indexes climbed to new records recently, fueled by strong corporate earnings that beat Wall Street expectations. This time, however, it is not just tech or biotech stocks that led the markets—industrial and consumer stocks have been among the biggest winners.

The Dow Jones Industrial Average broke 22,000 on Aug. 2 for the first time, recording a nearly 24 percent increase since the election last November. Other indices, including the S&P 500 and the Nasdaq Composite, also posted all-time highs in July and August.

The aerospace giant Boeing Co. (ticker symbol: BA) was the top performer on the Dow index recently. Fueled by strong results in the second quarter this year, the company’s shares soared nearly 23 percent in July, a performance not seen since October 1982.

Boeing shares accounted for more than half of the Dow’s gain for the month, according to Morningstar.

The company announced strong free cash and earnings that beat analysts’ estimates thanks to its cost-cutting efforts and productivity improvements. Boeing shares are up more than 65 percent since the election.

With its recent advance, Boeing has surpassed Goldman Sachs and become the priciest stock in the index.

The Dow is a price-weighted index, which means the stocks with a higher price have more weight and a greater influence on the performance of the index. Hence Boeing now has the highest weight in the index with 7.4 percent followed by Goldman Sachs and 3M.

The Dow index may race to new records if Boeing’s rally continues.

Boeing shares accounted for more than half of the Dow’s gain in July.

Apple Inc. (AAPL) has been another top performer this year, getting closer to a $1 trillion market value. The company posted strong quarterly results on Aug. 2, beating expectations. The shares gained nearly 8 percent since then and 40 percent year-to-date.

Apple announced that it reached a milestone by selling 1.2 billion cumulative iPhones in the last 10 years.

Sales of the iPhone continued to grow, while the new model (iPhone 8) is expected to arrive in September. The company recorded a 2 percent year-on-year growth in sales for iPhone in the last quarter, beating estimates. iPad sales were up 15 percent year-on-year after 13 consecutive quarters of decline.

“We continue to believe Apple remains among the most underappreciated stocks in the world,” Brian White, an analyst at Drexel Hamilton, wrote in a research report.

Apple may win the race to be the first $1 trillion company should shares climb further. Apple’s current market capitalization is around $815 billion.

Shares of Caterpillar Inc. (CAT) and McDonald’s Corp. (MCD) are other top performers that have driven up the Dow index since July 25 when both companies posted better-than-expected second quarter results.

Farm and industrial equipment giant Caterpillar gained 6 percent since second quarter results and 24 percent year-to-date. Caterpillar was among the 10 companies on the Dow that underperformed in 2016.

Shares of McDonald’s, on the other hand, rose more than 25 percent year-to-date, reaching new highs. The company reported positive results both domestically and internationally thanks to its turnaround efforts under new management.

The company recorded better than expected comparable sales growth in the United States due to its cold beverage promotion, which offers soft drinks for $1, and the launch of its “signature crafted sandwiches,” which are priced between $5 and $7 each.

According to the data provider Factset, 89 percent of S&P 500 companies announced their second quarter 2017 results as of Aug. 8 and nearly 72 percent of the companies have beat the earnings estimates.

With the recent rally, the valuations of S&P 500 companies have reached a record level. The forward 12-month price-to-earning (P/E) ratio is 17.7, compared to the five-year average of 15.4 and the 10-year average of 14.0, according to the report.

CEOs of S&P 500 companies are hopeful that the new administration will launch critical reforms to boost business and economic growth.

Tax policy, regulation, trade policy, and the health care bill were among the top policies discussed during earnings calls, according to Factset.

“It’s hurting the average American that we don’t have these right policies,” said JPMorgan CEO Jamie Dimon during the bank’s earnings call on July 14.

He complained that the United States has become one of the most bureaucratic, confusing, and litigious countries and urged the new administration to make breakthroughs in taxes, infrastructure, and regulatory reform.