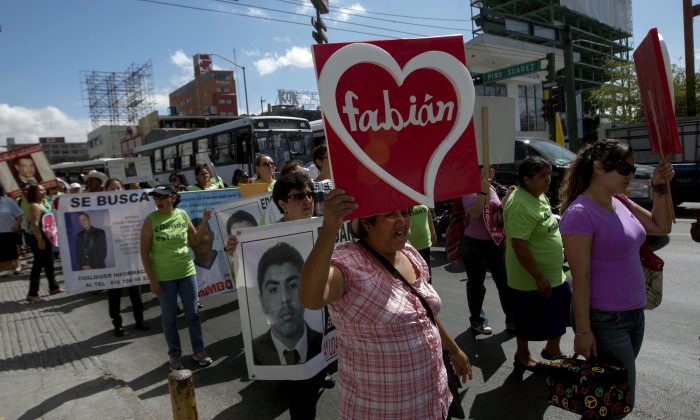 Relatives of missing people, victims of the "War against Drugs" protest in front of the Local Attorney in Monterrey, State of Nuevo Leon, Mexico on June 21, 2013. Mexican poet and peace activist Javier Sicilia was at the protest. (Julio Cesar Aguilar/AFP/Getty Images)
International

Rock legend Sting urged Mexico’s government on Monday, October 12th, to do more to end the “epidemic” of disappearances after meeting with families of some of the country’s many missing people.

Sting, who is on tour in the Latin American country, met with four relatives of missing Mexicans ahead of a concert in the central state of Morelos, according to Amnesty International.

“It is not hard to imagine the anguish and torment that families undergo when a loved one disappears, vanishes without trace or explanation, when attempts to find them or discover their fate are frustrated by the apparent indifference of the authorities to a situation that has become an epidemic in Mexico,” Sting was quoted as saying by Amnesty in a statement.

“I met with some of the families, but they are just the tip of the iceberg,” said the former frontman for The Police, who joined Amnesty’s campaign against disappearances in Mexico.

“I call on the Mexican government to follow up on these cases far more vigorously, to find and prosecute those responsible, and to prevent through legislation this scourge of disappearances and human rights abuses.”

More than 20,000 people have been reported missing in Mexico since the drug war began to intensify in December 2006, according to official figures.

The plight of Mexico’s disappeared has regained attention since 43 students vanished after being attacked by police in league with a drug cartel in the southern state of Guerrero in September 2014.