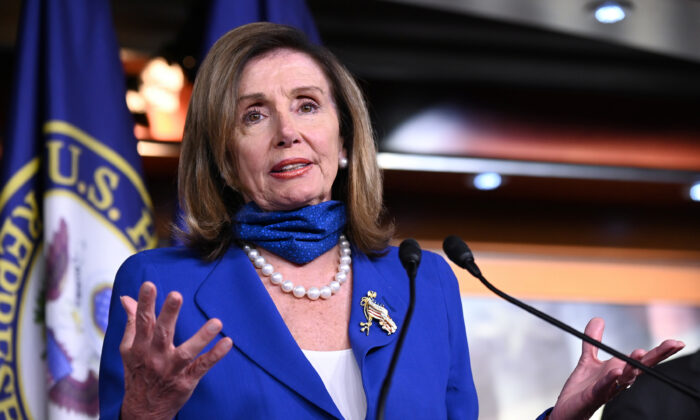 The chance that there will be a quick end to the stalemate over a new stimulus bill diminished on Oct. 12, with members of the House being told not to expect any action this week.

House Speaker Nancy Pelosi (D-Calif.) and Treasury Secretary Steven Mnuchin are expected to speak more this week as they attempt to come to some kind of accord. Over the weekend, Pelosi rejected the White House’s latest offer, prompting Mnuchin and White House chief of staff Mark Meadows on Oct. 11 to call on Congress to pass a bill that authorizes the use of additional Payment Protection Program funds for small businesses in the meantime.

The latest blow to the talks came on Oct. 12 after House Majority Leader Steny Hoyer (D-Md.) told lawmakers in a letter that “members are advised that … no votes are expected in the House this week.” He said the lack of action on pandemic relief is “due to the Trump administration’s failure.”

“Members are further advised that as conversations surrounding additional coronavirus relief legislation continue, it is possible that the House will meet during the month of October.”

Last week, Trump first called off negotiation talks but later said he wanted $1,200 stimulus checks and airline relief. Days later, the president said he was considering even larger funding than the $2.2 trillion that Democrats have proposed.

Senate Majority Leader Mitch McConnell (R-Ky.), who previously warned that some Republicans won’t support a larger stimulus package, recently told reporters that there isn’t enough time to pass a deal before the election.

Seemingly noting the small chance a deal can be made before the election, Mnuchin and Meadows wrote in a letter that “the all-or-nothing approach is an unacceptable response to the American people,” making a reference to Pelosi’s insistence that a relief package needs to be broad and have significant funding to states and cities.

But some Democrats have called on Pelosi to accept the $1.8 trillion White House offer.

“Nancy Pelosi take this deal! Put politics aside people are hurting,” he wrote on Twitter over the weekend.