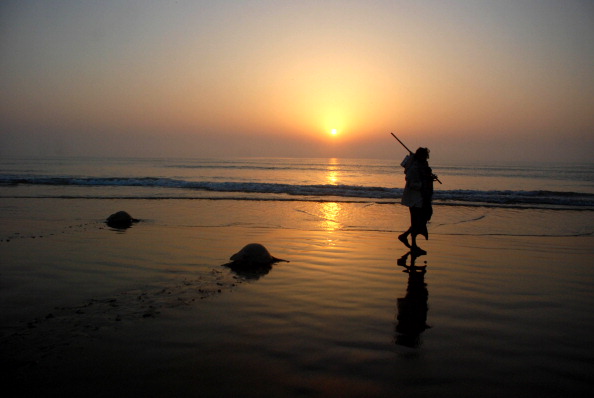 An Indian man walks past as Olive Ridley Turtles return to the sea after laying eggs on Rushikulya Beach, some 140 kilometres (88 miles) south-west of Bhubaneshwar, early March 8, 2011. (Strdel/AFP/Getty Images)
Environment

In what could be a major setback to wildlife conservation in the country, the beaches of Gahirmatha in Odisha are still awaiting the arrival of Olive Ridley sea turtles that normally arrive by mid-April for their annual nesting. While officials of the Bhitarkanika National Part are still optimistic about their arrival, they have been able to locate only 17 nests in the last few days.

Over 25,000 turtles reportedly laid eggs on the Rushikulya beach in Ganjam district of the state between February 10 and 11. But strangely, the Nasi-I and Nasi-II islands of Gahirmatha Marine Sanctuary in Kendrapara district, which happens to be the world’s largest sea turtle rookery, is yet to welcome its annual visitors who normally arrive two weeks after the mass nesting at Rushikulya.

Various reasons have been sighted for this unusual phenomenon of the turtles skipping their favourite nesting site this year. These include shrinkage of the beaches, climate change, illegal fishing, and illumination from the Missile Test Range at the neighbouring Wheeler Island as well as other natural factors like high tides during lunar cycles.

Once a 12 km long beach, constant sea erosion has reduced the Gahirmatha to just over half its original length. In fact, not only has the Nasi-I been reduced to just 2.1 km in length, the beach has also been divided into at least three short stretches over the last four years. Additionally, violent tidal waves have also altered the geography of the scenic island, affecting the turtle habitat.

“There are several instances in past when the endangered species came en masse for mass nesting in the third week of April. Hence, we are hopeful that the turtles would throng the beach,” said Divisional Forest Officer, Kedar Kumar Swain of Rajnagar Mangrove (Wildlife) Forest Division.

“It is too early to conclude that turtles will skip mass nesting this year. Many turtles have congregated in the sea near Gahirmatha. We are hopeful that they will come to Gahirmatha soon for laying eggs,” he added.

Although the nesting pattern of the Olive Ridley turtles could not be predicted for this year, the Odisha State Government has imposed a six-month fishing ban in the area from November 1, 2013 till May 31, 2014 in order to protect the sea turtles as they arrive at the states beaches. The state government has been taking protective measures for the sea turtles since 1997.

Swain also added that the forest department has set up 15 turtle protection camps, including three offshore camps at Barunei, Agaranashi, and Babubali islands.

“Forest guards have also been deployed to arrest the fishermen who enter the marine sanctuary during the ban. From November 1, 2013 till date, around 150 fishermen have been arrested for illegal fishing in Gahirmatha sanctuary, and about 35 boats and trawlers have been seized,” he said.

He further added that the department has been receiving active support from the personnel of the Marine Police Stations at Paradip and Kharinashi as well as the Coast Guard in their combined efforts to prevent illegal fishing activities during the stipulated ban period.

While it cannot be conclusively said that the turtles will skip Gahirmatha this year, the delay is certainly a worry and a bad reflection of the changing conditions of the important ecological site of the world.