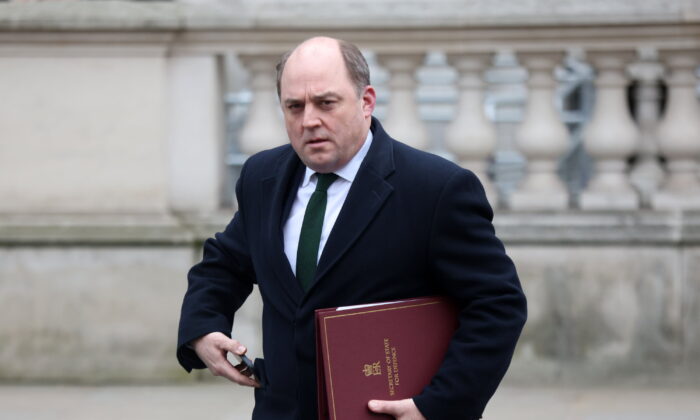 Britain will “work all day” to try to get the Swift international payment system “turned off for Russia”, Defence Secretary Ben Wallace has said.

Ukraine has called for Moscow to be kicked out of the system, which allows financial transactions to be made around the world.

However, there has been opposition in Europe over fears the fallout could hit other countries too.

Wallace suggested Boris Johnson would push for other world leaders to back the measure, which would be one of the most serious sanctions available, when he meets virtually with Nato allies on Friday.

US President Joe Biden said on Thursday it was “always an option but right now that’s not the position that the rest of Europe wishes to take”.

Speaking on BBC Radio 4’s Today programme, Wallace said: “Britain wants the Swift system to be turned off for Russia. But unfortunately the Swift system is not in our control – it’s not a unilateral decision.”

Wallace said the system is used “to move money around”, explaining: “When you pay Russia for its gas, it probably goes through the Swift system, for example. It is based in Belgium. It has a number of partners that control it, or nation states.”

He added: “We want it switched off. Other countries do not. We only have so many options. We are going to work all day to try and get it (switched off for Russia).”

He told LBC there was “still time” for that decision to change and he highlighted that the Prime Minister was meeting with Nato allies later on Friday.

Asked if Swift was a key sanction, Wallace said “it is and we’re trying”, and he added: “We have to keep working to get that.”

“We will work all the magic, do everything we can in diplomacy, the Prime Minister is going to address the Nato leaders summit today,” he told BBC Breakfast.

He said: “Like so many things, these are international organisations, and if not every country wants them to be thrown out of the Swift system, it becomes difficult.

“We’re going to work on that today and tomorrow.”

Irish Government minister Thomas Byrne said his Government would have supported removing Russia from the Swift network, but stressed it was important that EU countries had unity over the sanctions imposed.

“Our priority as an Irish Government was to have unity around the table. That was very, very important,” he told RTE radio.

“Having said that, we pushed and will continue to push for the broadest possible sanctions. So, yes, the Irish Government has no difficulty whatsoever with the Swift system being sanctioned and that’s something that we would support.”

Taoiseach Michael Martin said: “People have different perspectives on the efficacy or value of Swift in itself, so I don’t think we should singularly focus on Swift because the sanctions will hit hard at the industrial base, in terms of areas that will hurt the Russian economy.”

He said it may be something the EU will return to in the future, as the war in Ukraine continues to rage.

Labour leader Sir Keir Starmer said banning Russia from the system was a “now decision” which should be made as soon as possible.

“That is a now decision and the Labour Party would support it in full. We think it should happen now,” he told BBC Breakfast.

Ukraine has called for sanctions against Russia to go further and the country’s foreign minister said allies would have blood on their hands if they did not remove Russia from Swift.

But German Chancellor Olaf Scholz was reported to have said that certain measures should be “for a situation where it is necessary to do other things as well” when asked about Swift, while Dutch Prime Minister Mark Rutte said it was a “sensitive” issue “because it would also have an enormous impact on ourselves”.

Swift is a secure messaging system used by financial institutions to move money around the world.

Cutting Russia out of the system would cause delays and extra costs for the Russian economy, but reports suggested there were fears it would prevent mainland Europe from buying Russian gas, on which it relies.

Another concern is that Russia could then turn to an alternative system, potentially one developed by China, which could erode the power of the US dollar.

The measure has been used before, when Iran was blocked from the system due to its nuclear programme.