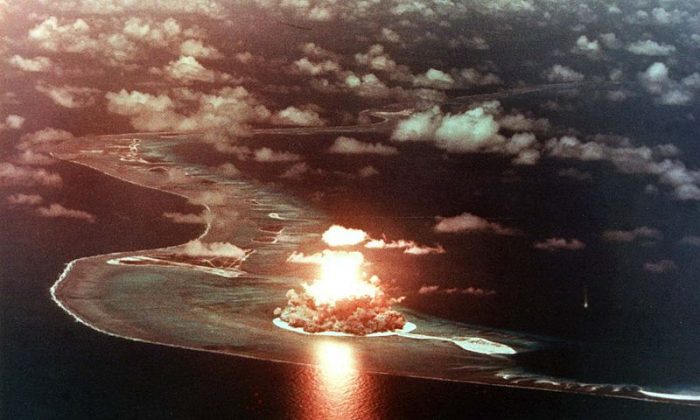 Test shot Seminole of Operation Redwing, conducted on the coast of the island of Bogon. (Public Domain)
International

On March 1, 1954, the U.S. military detonated a thermonuclear weapon with power that was such a mystery that scientists took bets on whether it would ignite the earth’s atmosphere.

The atmosphere didn’t catch on fire, but the historically powerful blast was nearly three times larger than expected, with its mushroom cloud reaching higher than the height that commercial airliners fly. If detonated in Washington, it’s estimated that the entire population of the region would have died, with millions of additional deaths soon following from radiation poisoning extending to the borders of Canada.

But instead, the test took place on the sparsely populated Marshall Islands—as did more than 65 other tests between 1946 and 1958, which experts say is the rough equivalent of 1.7 Hiroshima-sized bombs per day for 12 years.

The Marshall Islands and its inhabitants have been ravaged by the fallout from the blasts for decades. Communities have been relocated, cancer rates have soared, and some islands remain uninhabitable. At one site on Runit Island, a deteriorating concrete dome leaks nuclear waste into the groundwater, causing potential environmental damage that the U.S. government is still working to assess.

Now, as a defense compact between the two countries is set to expire in 2023, the Pacific island nation is seeking additional assistance.

The United States spends about $70 million annually on the Marshall Islands in various forms in exchange for exclusive access to lands and waterways for national security purposes, but Marshallese leaders and others say that isn’t nearly enough to recover from the devastating effects of nuclear radiation and other environmental damage. They say negotiators who earlier struck deals—including a 1986 $150 million settlement in exchange for forfeiting rights to sue the U.S. government—didn’t realize that the aftereffects of the nuclear testing would persist for many more decades.

Under successive administrations, the federal government has been hesitant to take on additional responsibilities. The Department of Energy has said maintenance for the dome on Runit Island falls to the Marshallese, while negotiations with State Department officials have stalled.

The situation is a growing concern among a cross-section of political stakeholders.

Human rights activists have called for the U.S. government to rectify historical injustices for decades, and in recent years, they’ve been joined by national security officials who are willing to grant more concessions so that the Marshall Islands doesn’t fall under China’s influence.

Concerns and frustrations by all parties involved were expressed at an Oct. 21 House Natural Resources Committee hearing on the status of U.S.–Marshall Islands relations. There, the committee was informed that no negotiations have taken place between the countries since December.

“Sadly, the agenda [at the December meeting] was fixed. It was on a very specific provision that we thought was not adequate, and we want to broaden the issues—including the nuclear issue,” said Casten Nemra, the minister of foreign affairs for the Marshall Islands. “This is partly why, in our view, the negotiations thus far have moved slowly.”

One of the major sticking points has been the waste dome on Runit Island. The Marshallese have been calling for help with the dome for years, but U.S. officials have reportedly declined.

In his opening statement at the hearing, Department of Energy official Matthew Moury reiterated the government’s position that the “Marshall Islands bears full responsibility for maintaining and monitoring the dome and Runit Island.”

Moury’s statement drew the ire of multiple committee members, who suggested that the State Department might be responsible for the policy.

Rep. Katie Porter (D-Calif.) criticized the State Department for declining to attend the hearing and for allegedly coaching other departments on what to not say.

Gregorio Sablan, the delegate to the House for the Northern Mariana Islands, also accused Moury of taking his position from the State Department after Moury couldn’t cite the provision that places responsibility for Runit on the Marshall Islands.

“That was the historical information provided to me as implementer of these programs,” Moury said.

“Do they work for the State Department, may I ask?” Sablan asked.

“I do not know the answer to that question,” Sablan said.

Responding to a media inquiry from The Epoch Times, the State Department said it would be “inappropriate” for the department to attend such a hearing at this time.

The State Department also pushed back against the notion that the Marshall Islands bears full responsibility for Runit Island, saying that it has helped the country with environmental issues for decades.

At the hearing, national security witnesses expressed dismay at the lack of activity from the U.S. government toward its Pacific counterpart.

“Frankly, I’m startled at the lack of negotiations,” said Dean Cheng, a senior research fellow on Asian studies for The Heritage Foundation. Cheng said China will fill the vacuum left by the United States if it fails to live up to its obligations in the Marshall Islands.

“Time is running out, and there are others out there watching and waiting to exploit the opportunity we’d be presenting them on a silver platter,” he said.

“Finally, the facilities in the [Marshall Islands], including on Kwajalein, play a central role in space surveillance,” Cheng said.

“Because of the high speed of objects in orbit, even a bolt or a screw can do enormous damage to the International Space Station or an orbiting satellite. The newly built Space Fence on Kwajalein provides the Space Force with the ability to monitor objects as small as a marble.”

Meanwhile, the dome on Runit Island continues to leak. Moury told committee members that his department has the funding and resources to investigate the scope of the damage and the environmental risk involved, but he said pandemic-related travel restrictions have prevented his staff from visiting the area—another statement that drew the committee’s ire.

“It doesn’t feel like this is a priority. If I wasn’t clear about how much damage this is causing, then that would be at the top of my list,” Rep. Ed Case (D-Hawaii) said. “I see in your report various reasons for why you haven’t pulled it off, but in honesty, I struggle to understand why you can’t overcome logistical concerns, given the possibility of a substantial amount of leakage we just haven’t detected yet.”

Moury held firm that COVID-19 travel restrictions were a significant obstacle to assessing the dome.

“I don’t want to give the impression that this isn’t one of our highest priorities, because we have people working on this all the time,” he said. “COVID restrictions are real and were established to protect the population of the Marshall Islands.

“So we have not been able to get out to the islands.”

After the hearing, the State Department provided more details about the plan to monitor the Runit Islands’ groundwater.

“In August 2019, DOE [Department of Energy] received $1.7 million to work closely with the RMI [Republic of the Marshall Islands] to develop a credible groundwater monitoring program … which includes plans to drill new holes in and surrounding the Cactus Crater containment structure to collect representative water samples for radiochemical analysis,” a State Department spokesperson told The Epoch Times.

“This sampling program should allow DOE to help the RMI develop and establish a long-term groundwater monitoring program.”

Update: on Oct. 24 at 3:26 ET comments from the State Department were added to the article.