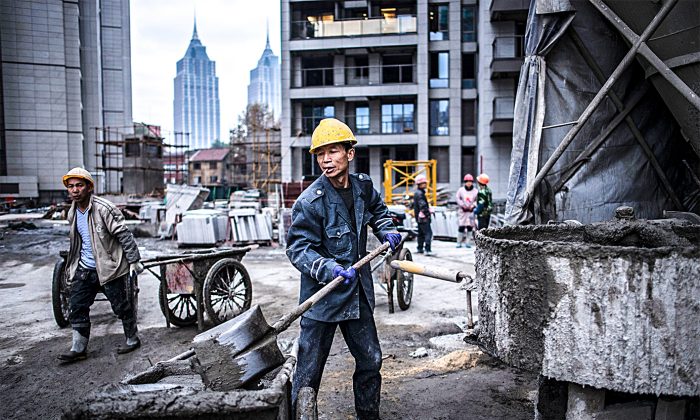 Construction workers at a residential skyscraper in Shanghai on Nov. 29, 2016. On-the-ground research in China shows that only state-owned enterprises are hiring, under the direction of the regime, while private enterprises are not. (JOHANNES EISELE/AFP/Getty Images)
Business & Economy

Given the notorious unreliability of official Chinese economic data, analysts risk getting it wrong when relying solely on figures the government puts out. Is the China growth story, and a rebalance from manufacturing to consumption, actually happening? Or is the country’s enormous debt, with semi-bankrupt, state-owned enterprises and widespread overcapacity, still the overriding concern?

To shed light on these murky issues, Leland Miller and his team at China Beige Book International (CBB) interview thousands of companies and hundreds of bankers on the ground in China each quarter to get an accurate gauge of how the economy is doing.

CBB, which collects quantitative data and conducts in-depth interviews with Chinese executives, often comes up with data that are completely opposite to the official narrative—but not always, as its survey for the first quarter of 2017 shows.

“China Beige Book’s new first-quarter results show an economy certainly stronger than a year ago and performing comparably to last quarter. But core problems remain, and some of them are getting worse,” the CBB Early Look Brief states.

First, the good news: In order to maintain social stability, the Chinese Communist Party needs to maintain high employment at all costs. And it did in the first quarter.

“Nationally, jobs and wage growth were unchanged from last quarter, but the Party may not be resting easy about the desired stability,” the brief states.

What’s keeping central planners up at night is the fact that only state-owned enterprises are hiring, under the direction of the government, while private enterprises have cut their hiring, according to CBB.

This is another problem, given how Chinese officials have hyped up the term “rebalancing” over the last decade. The term covers a range of policies intended to shift economic focus from heavy industry and exports to consumption and services.

“It’s about cutting power, it’s a self-imposed revolution,” said Chinese Premier Li Keqiang, in his first speech after being appointed in 2013. “It will be very painful and even feel like cutting one’s wrist.”

Over the last couple of years of CBB coverage, this rebalancing has failed to materialize on the ground, although officials keep talking about it.

The latest quarter was no exception. One important proxy for the ascent of the Chinese consumer, for instance, is retail sales.

In 2017, even official retail sales growth dipped below 10 percent for the first time in years. Although this is a number that developed markets could only dream about, it has been trending down, not up as it should under a rebalancing scenario.

China wants to move away from making widgets and steel to providing high-level domestic services like finance and software-based solutions.

And CBB data suggests the retail sector may in effect be even weaker. As the brief states: “Our more extensive results show much more than easing sales. Profits, investment, cash ﬂow, and hiring all weakened as compared to [the last quarter of 2016]. Price and wage growth were also slower. Retailers borrowed less despite sharply lower rates, indicating lack of confidence.”

Another indicator is the services industry. China wants to move away from making widgets and steel to providing high-level domestic services like finance and software-based solutions. This approach would be better for the highly polluted Chinese environment, too.

Such hopes remain “premature,” states the CBB brief. Manufacturing did better than services in all respects, from sales to profits, as well as investment and borrowing.

Another major element of rebalancing is the cutting of excess industrial capacity, especially in coal and steel. These would all be market-based reforms that would require semi-bankrupt companies to stop producing goods, wasting resources, and depressing prices.

Not so, according to the CBB report. “China Beige Book data show net capacity has risen in every subsector for each of the last four quarters.” This means that China did shut down some plants, but that more new ones were built at the same time.

Diana Choyleva: China Is Getting Serious About Reform

According to research firm Capital Economics, the accounting doesn’t add up. “If companies are actually reducing their production capacity, then one should expect that a portion of their workforce is no longer needed and will be laid off,” the firm wrote in a recent report. However, total employment in what it labels “overcapacity sectors” has only fallen by 5 percent, significantly less than would support the official numbers.

According to the CBB, however, the tightening has only fed through to the property sector, which it believes may have peaked. For everybody else, borrowing conditions remain flush. “[Monetary tightening] hasn’t happened yet, not on the street. The price of capital fell across the board this quarter, at banks, at shadow financials, and in the bond market.”