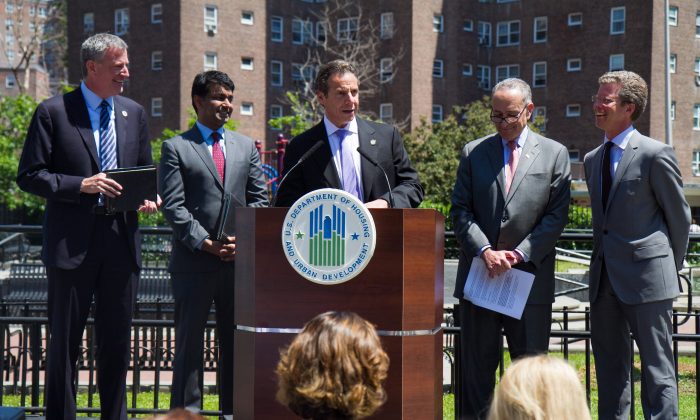 Democratic New York State Governor Andrew Cuomo’s defeat of Republican Westchester County Executive Rob Astorino in the general election by 13 percent rather than the 30 percent expected as of 10 months ago is widely seen as not good news for the governor. Making matters even worse for Cuomo, to gain that disappointing 13 percent victory he spent a whopping $45 million to Astorino’s $4.8 million, painting an embarrassing Goliath beats David portrait to his victory.

It has been no secret that Cuomo, a nationally known political figure, saw a victory somewhere in the 30 percent range as the first giant step in his plan to insert himself as a serious candidate for the nomination for the Democratic presidential candidate in 2016 or, by latest, 2020.

Cuomo’s plan was said to be based on the possibility that current presumptive 2016 nominee Hillary Clinton would decide not to run for the presidency, opening the political door for Cuomo—with a 2014, 30 percent election victory in a large, key northeastern state under his belt—to run.

Such a decision by the former first lady, it was so speculated, would be associated with her past health issues (she was successfully treated for a blood clot to the brain in December 2013) and her age (she will be 69 years old in 2016).

Yet even if Clinton does run in 2016, as is still widely assumed, Cuomo’s future in national politics, right up to the end of 2013, seemed to be bright—with the very real possibility that if Clinton ran in 2016, she could very possibly be defeated by a Republican, leaving Cuomo as the immediate front-runner for the Democratic presidential nomination in 2020.

However, the talk of a future President Cuomo began to steadily recede as the year went on, culminating with his less-than-hoped-for 13 percent victory. And for that, it can be argued, Cuomo has only himself to blame.

In that one interview, which quickly became part of Republican anti-Cuomo fodder, the governor, who while later watering down his remarks, alienated countless pro-life, pro-traditional-family, and pro-second amendment New Yorkers—many of whom also happen to be Democrats or Independents.

If his first major mistake could be attributed to a slip of the tongue, his second might be attributed to a lapse in understanding the mood of the public. Cuomo, whose “Let’s clean up Albany” message helped sweep him into office four years ago, created the Moreland Commission in July 2013. Granted the power to issue subpoenas, and staffed with seasoned prosecutors, the role of the 25-member bipartisan commission was to investigate government corruption in the state Capitol—a problem polls indicated were on the minds of many voters.

According to Cuomo at the time, he had the authority to investigate “the lieutenant governor, the comptroller, any senator, any assemblyman,” as well as even Cuomo himself.

Then in March 2014, Cuomo suddenly terminated the commission, even as a major Albany newspaper was reporting that Moreland investigators were in the middle of the process of probing 15 lawmakers for alleged criminal wrongdoings.

In the face of extremely harsh criticism coming from the media, from Republicans and even from some members of his own Democratic Party, Cuomo attempted to explain the reasoning behind his controversial action: Because, he argued, the state Senate and Assembly had agreed to pass a series of new ethic reforms that he would sign into law, the commission was no longer needed. The problem of official corruption in New York state, Cuomo’s remarks suggested, had been all but solved.

When that explanation seemed neither to satisfy the majority of voters nor quiet his political foes, Cuomo told a news reporter questioning him about the controversy, “It’s not a legal question. It’s my commission. My subpoena power. I can appoint it. I can disband it. I can’t interfere with it, because it’s mine. It is controlled by me.”

Not surprisingly, these remarks created a political firestorm for the governor. While Cuomo continued to maintain most of his lead over Astorino in the governor’s race, according to a Quinnipiac Poll taken in late May, more than 75 percent of New Yorkers believed that his decision to shut down the Moreland Commission was “based on a political deal,” and slightly less than 50 percent offered favorable opinions on his performance as governor, a record low number in that category for him.

And here is where Cuomo’s last major mistake of 2014 occurred. Rather than waging a strong active campaign against Teachout, the Cuomo campaign largely sat back, saying it was saving its resources for the then-upcoming battle against Astorino.

Reflecting the thoughts of the governor’s campaign, one Cuomo election official, was quoted as saying at the time, “Any protest candidate [Teachout] is going to get in the low to mid-high 20s.”

Unfortunately for Cuomo, his Democratic challenger far surpassed those numbers. After the final votes were tallied on that primary election night, it was determined that Teachout, a political neophyte who had run with a bare-to-the-bones campaign war chest, had garnered an incredible 34 percent of the vote.

And this poor showing by Cuomo coupled with his unimpressive victory over Astorino, according to many pundits, could make it very unlikely that he will be elected president one day.

Yet Mark Twain’s famous utterance that the reports of his death were greatly exaggerated still could apply to Cuomo’s future as a presidential candidate. Cuomo’s victory, despite the disappointing final count, gives him the opportunity to build on the same successes of his governorship that made him so popular prior to this year.

Those successes, which were well-publicized throughout the state and even captured some national media attention included delivering the state budget on time for four consecutive years, an accomplishment not witnessed in Albany in three decades; producing in response to the Newton Connecticut Sandy Hook Elementary School massacre, the passage of the NY SAFE ACT, which among other provisions, mandates background checks for all gun sales; creating more than a half-million private sector jobs and reducing the state unemployment rate from the 8.2 percent when he took office to its current level of 5.6 percent.

These were accomplishments that impressed even some Republicans, including powerful Nassau County Executive Ed Mangano, who wound up endorsing Cuomo’s re-election bid.

In addition, Cuomo’s victory gives him the chance to address the state’s remaining major economic problem. The economies of dozens of upstate New York counties continue to remain stagnant and many suffer from unemployment rates that hover above the 10 percent mark.

As of two years ago Cuomo’s strategy to stimulate the upstate economy was predicated upon his plan to lift the then two-year-old ban on hydro-fracking and allow oil companies to explore the Marcellus Shale formation (an enormous area located across dozens of counties in upstate New York, including Steuben, Chemung, and Allegany) said to contain 489 trillion cubic feet of natural gas.

In the 34 states employing this controversial method of drilling for natural gas thousands of feet beneath the ground (which notably include Pennsylvania, which shares some of the land in the Marcellus Shale with New York), such hydro-fracking has resulted in major boosts to their economies. Pro hydro-fracking activists (composed primarily of business, energy industry, and organized labor leaders) reportedly convinced Cuomo that hydro-fracking in upper New York state would provide a similar stimulus to the upstate economy—without, they contended, causing any harm to the environment.

However once the politically powerful environmentalists, who contend that hydro-fracking can cause deadly harm to humans and irreparable damage to the environment, became aware of Cuomo’s plans, they quickly informed him that if he decided to go through with his original plans, he would risk losing their political support—both in the then upcoming governor’s race, as well as any future national office he might choose to seek.

Thus came Cuomo’s decision to put off his determination until after the election. True to that promise, Cuomo recently pledged that he would announce his decision by the end of this year.

If in formulating that decision Cuomo somehow discovers a way of offering a compromise found acceptable by both the pro- and anti-hydro-fracking forces, he will have performed a tremendous political miracle.

And such a miracle will probably go a long way in placing his name back on the top of the list of future presidential contenders—despite the wounds he inflicted upon himself in 2014.

Robert Golomb (MrBob347@aol.com) is a nationally published columnist. He can also be followed on Twitter @RobertGolomb