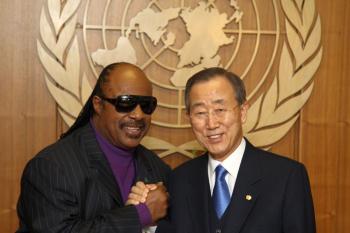 Michele Goncalves
View profile
Follow
biggersmaller
Print
United Nations Secretary-General Ban Ki-moon has recently chosen Grammy Award-winning songwriter and musician Stevie Wonder as a United Nations Messenger of Peace. Wonder, who has been legally blind since birth, will have a special focus on people with disabilities in his work.

The Secretary-General said in a news conference, “Our newest Messenger of Peace is someone who is admired by millions of people and has given back to millions of people. I recognize that he has consistently used his voice and special relationship with the public to create a better and more inclusive world, to defend civil and human rights and to improve the lives of those less fortunate. Stevie Wonder is a true inspiration to young people all over the world about what can be achieved despite any physical limitations.”

The U.N. describes "Messengers of Peace" as individuals who possess widely recognized talents in the fields of art, academia, literature, sports, and entertainment. It helps to raise worldwide awareness of the organization’s ideals and activities. Through their public appearances, contacts with the international media and humanitarian work, they expand public understanding of how the United Nations helps to improve the lives of people everywhere.

Stevie Wonder has been recognized for his philanthropic efforts which include the United States President’s Committee on Employment of People with Disabilities, the Children’s Diabetes Foundation, Junior Blind of America and the creation of the Wonder Vision Awards Program. For over 10 years, he has provided toys for children and families in need with his annual House Full of Toys benefit concert.