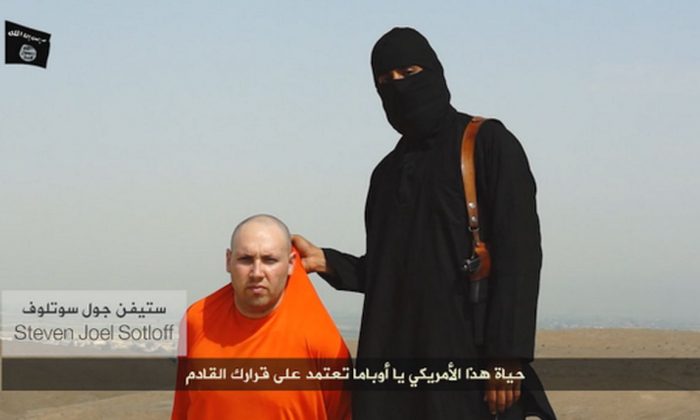 Mohammed Emwazi was identified as the ISIS extremist the media has dubbed, “Jihadi John.” Emwazi is originally from London. (Screenshot)
US

Steven Sotloff was apparently threatened by the the Islamic State, or ISIS, who said President Obama’s next steps are critical.

Zaid Benjamin, the Washington correspondent for Raido Sawa, tweeted that Sotloff’s life is at stake. “#ISIS say the life of Steven Joel Sotloff depends on Obama’s next decision,” he wrote, with a caption of a video that was released by ISIS.

It came after James Foley, an American photojournalist, was reportedly beheaded by ISIS, which was captured on video.

Sotloff has worked for TIME, the National Interest, and Media Line, according to The Wire.

According to The Wire, he went missing near Aleppo, Syria, on Aug. 4, and his family said they were aware of the situation but did not want to publicize the information. He was being held in Raqqa.

A photo purporting to be of Sotloff, with a shaved head and wearing an orange shirt, accompanied Benjamin’s tweet.

After Foley was apparently beheaded, the White House issued a statement on the matter. It was attributed to NSC spokesperson Caitlin Hayden.

“We have seen a video that purports to be the murder of US citizen James Foley by ISIL. The intelligence community is working as quickly as possible to determine its authenticity. If genuine, we are appalled by the brutal murder of an innocent American journalist and we express our deepest condolences to his family and friends. We will provide more information when it is available,” the statement reads.

IS: “The life of this American citizen, Obama, depends on your next decision” pic.twitter.com/tFZyBGN9YN

Armed groups opposing the Assad regime in Syria have already amassed an estimated several hundred portable anti-aircraft missiles that are highly mobile, difficult to track and accurate enough to destroy low-flying passenger planes, according to a new report by Small Arms Survey, a respected Switzerland-based research organization that analyzes the global flow of weapons.

The report was released Tuesday, hours after the Federal Aviation Administration issued a notice Monday to U.S. airlines banning all flights in Syrian airspace. The agency said armed extremists in Syria are “known to be equipped with a variety of anti-aircraft weapons which have the capability to threaten civilian aircraft.” The agency had previously warned against flights over Syria, but had not prohibited them.

The separate warnings highlighted the growing concerns about the proliferation of anti-aircraft missiles in the wake of last month’s lethal attack on a passenger jet flying over Ukraine. While the missile used to attack the Malaysia Airlines jet was a long-range surface-to-air missile, the new warnings focus on smaller launchers and missiles known as “man-portable air defense systems,” or MANPADS, which target aircraft flying at lower altitudes, taking off or landing.

The Small Arms Survey report said that several hundred anti-aircraft missile systems in rebel arsenals are mostly Russian and Chinese in origin and were either seized from government forces or smuggled in from nations sympathetic to the insurgents. The most immediate danger comes from newer, sophisticated models that could easily be diverted to extremist groups outside Syria.

“In the hands of trained terrorists with global reach, even a few missiles pose a potentially catastrophic threat to commercial aviation,” wrote Matthew Schroeder, the report’s author. The analysis is based on government and media reports and video footage of anti-aircraft weapons posted online from inside Syria.

The extremist Islamic State group that has overrun much of northern and western Iraq also operates insideSyria. The militants, who have drawn fire from U.S. drones and fighter jets, recently posted an online propaganda video showing one fighter appearing to fire an older-model, Russian-made SA-7 anti-missile system.

Most American and other commercial airlines already have halted flights over and into Syria. Citing the threat of MANPADS strikes, the FAA warned American carriers in May 2013 to avoid Syrian airspace, a move heightened Monday to a total ban.

“Opposition groups have successfully shot down Syrian military aircraft using these anti-aircraft weapon systems during the course of the conflict,” the FAA said in its “notice to airmen.” The agency added that the presence of anti-aircraft weapons creates a “continuing significant potential threat to civil aviation operating in Syrian airspace.”