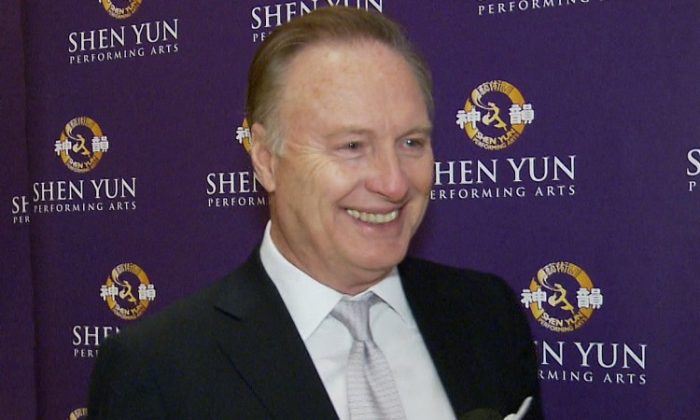 “I think it’s so important for people in the business community to understand the cultural values and traditional heritage of the Chinese culture,” Mr. Norris said. “They are, after all, one of our largest creditors, one of our largest trading partners, and it certainly represents major challenges for the future, and that to me it’s incredibly important to understand the cultural heritage.”

New York-based Shen Yun, which has been touring the world since 2006, unveils an entirely new lineup of dances, songs, and music each year, according to the company’s website. After communist rule in China nearly destroyed the culture, Shen Yun formed with the mission to revive the 5,000 year-old, divinely inspired Chinese culture.

“It is quite beautiful.”

The dancers display two types of flips, one called “flipping the body” which the website describes as, “a series of turning movements wherein the waist is the axis and the dancer’s torso is slightly tilted.”

Besides “very difficult jumping and tumbling techniques,” classical Chinese dance entails complete training in the fundamentals, and systematic training in movements and postures, according to Shen Yun’s website.

Since ancient times, China has been known as the “Celestial Empire,” and was profoundly influenced by the three religions of Confucianism, Buddhism, and Taoism, which “spawned a rich and profound system of values,” including “the five cardinal virtues of benevolence, righteousness, propriety, wisdom, and faithfulness.”

Mr. Norris believes the culture seen in Shen Yun should be seen by everyone.

“Even though it’s been suppressed, I think you’re beginning to see an emergence,” he said. “You’re seeing political events unfolding before our eyes in China, and an understanding of the heritage, I think, is just really important for Americans, and so I recommend the show to everyone.”

Reporting by NTD and Kristen Meriwether.