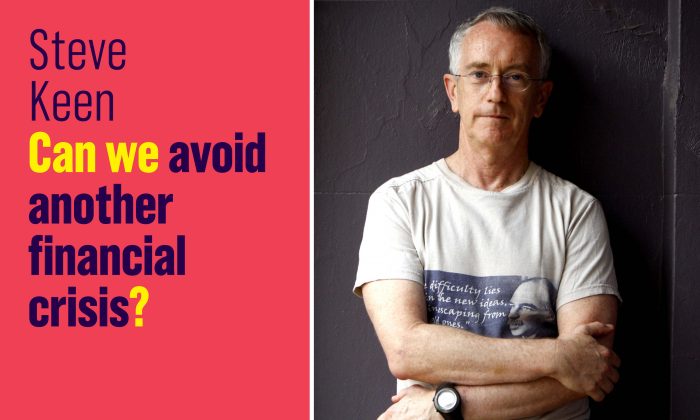 Steve Keen's new book "Can We Avoid Another Financial Crisis?" and a picture of the author. (Steve Keen)
Business

Steve Keen: ‘Can We Avoid Another Financial Crisis?’

The short answer is 'no'
By Valentin Schmid
Print

Economic theory is layered like a cake. Explanations within one layer make sense, but once you move to another layer, they no longer apply. Economist Steve Keen‘s new book, “Can We Avoid Another Financial Crisis?“, is an illustrative example.

The good news is that Keen’s book accurately describes the current economic system; the bad news is that the answer to the question in the title is “no.”

Keen defines his question within the layer of a corrupt banking system, the system we have now. He explains how it is that banks create money in the form of debt and how this leads to financial instability. In the book, he quotes the Bank of England’s own economists:

“In the modern economy, most money takes the form of bank deposits. But how those bank deposits are created is often misunderstood: The principal way is through commercial banks making loans. Whenever a bank makes a loan, it simultaneously creates a matching deposit in the borrower’s bank account, thereby creating new money.”

Keen builds on the work of Hyman Minsky and Joseph Schumpeter to explain why it is that private debt created out of nothing by private banks leads to economic instability.

“Desired investment in excess of retained earnings is financed by debt. This leads to a cyclical process in capitalism, which also causes a secular tendency to accumulate too much private debt over a number of cycles,” writes Keen.

The boom-and-bust cycle is as follows: During the early stages of a debt cycle, debt drives investment, which increases demand. The growing economy can easily service the debt, and most loans are repaid. The longer this benign growth phase lasts, the more that banks are incentivized to throw caution to the wind and loan more. Asset values backing the loans are also rising in value, encouraging recklessness.

At some point, debt levels become so high that the weaker economic players cannot maintain their interest payments, setting off a wave of defaults that causes the money supply to contract and leads to losses at banks. Banks then reduce their lending, further shrinking the money supply (where money is debt) even further, slowing economic activity. At this point, even strong players are in trouble and are forced to liquidate assets. The vicious cycle simply continues.

People who have witnessed the subprime boom and bust would mostly agree with this assessment. So why haven’t mainstream economists figured it out?

In his first major book “Debunking Economics,” Keen promised there was going to be “no more Mr. Nice Guy” toward mainstream economists who completely ignore private debt in their models, forecasts, and policy recommendations.

Keen continues with the same tenor in his current book, dishing out criticism of the profession where it is due and explaining why the mainstream keeps getting it wrong.

They face the junkie’s dilemma, a choice between going ‘cold turkey’ now, or continu[ing] to shoot up (on credit) and experience a bigger bust later. China is undoubtedly the biggest country facing the debt junkie’s dilemma now.
— Steve Keen, from the book 'Can We Avoid Another Financial Crisis?'

“Minsky’s theory is compelling, but it was ignored by the economics mainstream when he first developed it because he refused to make the assumptions that they then insisted were required to develop ‘good’ economic theory,” writes Keen.

Making too many illogical and irrational assumptions is the reason why mainstream economics is suffering from a crisis of confidence.

Can We Avoid Another Financial Crisis?

Keen answers the $1 trillion question with a resounding “no.” This is because too many countries rode the wave of the private debt explosion during the last boom and are now in the equivalent of economic purgatory. Keen identifies China as the biggest threat.

“They face the junkie’s dilemma, a choice between going ‘cold turkey’ now, or continu[ing] to shoot up (on credit) and experience a bigger bust later. China is undoubtedly the biggest country facing the debt junkie’s dilemma now. But it doesn’t lack for company,” he writes.

Other countries with a high level of private debt and a reliance on debt to fuel economic demand—Keen calls them “debt zombies”—are Australia, Belgium, Canada, South Korea, Norway, and Sweden.

In total, the influence of China and these smaller economies is simply too great for the world to avoid a financial crisis.

According to Keen, the solution within this layer of economic theory is more government regulation of the banking system and government deficits to counter a fall in private demand—which was essentially the policy response to the 2008 financial crisis.

More aggressive options include quantitative easing in the form of “helicopter money,” wherein the central bank monetizes government debt and the government then writes a check to households to either pay down debt or spend it in case there isn’t any debt to pay down. There could also be a more official debt jubilee where debt is simply forgiven.

The ultimate objective would be for the government to counter excessive private debt bonanzas.

Being an agnostic thinker, Keen also entertains concepts of government issued money and cryptocurrencies, although he doesn’t think they can eventually replace the banking system, partly because of scale, partly because of political resistance.

“As long as that model holds sway over politicians and the general public, sensible reforms will face an uphill battle—even without the resistance of the finance sector to the proposals, which of course will be enormous.”

And within this layer of the economic layer cake, within the constraints of our current political economy, Keen is again absolutely right.

At another layer of economic theory, however, Keen and Minsky are both incorrect in arguing that capitalism itself causes booms and busts and that more government is the ultimate solution for all economic layers, especially the financial one.

In a free market for money, banks that give out too much debt with low-quality collateral would have their liabilities devalued in the market, and depositors would take their business elsewhere. This competitive process would drain the offending banks of reserves and eventually lead to bankruptcy—without a bailout—unless they improved their lending processes.

It is only due to government attempts to assert control—whether by imposing legal tender laws or by accepting private bank liabilities at face value in the payment of taxes—that such overissued and poorly backed liabilities retain their value, leading to the boom-and-bust cycle. It is also the government that bails out offending banks time and again to save the corrupt system, leading to the moral hazard Keen describes.

Most modern economists, including Keen in this book, ignore this fundamental state interference in the market and then conclude that more government is needed to solve the very problems that government intervention created in the first place.

To Keen’s credit, he has researched historical instances of free market banking and concludes that the history does not confirm the Austrian theory of reflux. Thus, he stands on one side of a hotly contested academic debate, while scholars of the Austrian school of economics stand on the other.

Today, however, we have only this bastardized version of capitalism in which governments and banks collude to create the instability Keen deals with in this book. It is this layer of the system that Keen describes for the educated reader—accurately, convincingly, and with a touch of mordant humor.