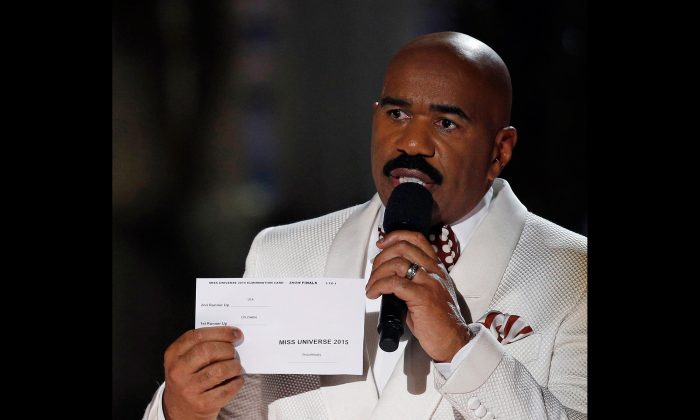 Steve Harvey’s wife has come out to defend him over the Miss Universe mix-up.

Harvey incorrectly named Miss Colombia Ariadna Gutierrez as the competition winner over the weekend, before correcting himself and declaring Miss Philippines Pia Wurtzbach as the true winner.

Harvey’s Marjorie took to Instagram to post a picture of the couple, saying: “You are a stand up man and a true class act [with] the way you went back out on the stage on live TV and took full responsibility alone.”

Following the gaffe, Harvey took to Facebook to apologize.

“I made a terrible mistake tonight in announcing the wrong winner and runner-up for the Miss Universe pageant,” he said. “I know how much pride many countries, fans and most importantly, the contestants take in preparing for this night. I hope that you can forgive me. All contestants were amazing but I want to specifically apologize to Miss Colombia and Miss Philippines again and wholeheartedly. You both represented well for your countries, families and yourselves.”

His wife’s comments come as questions have arisen over the teleprompter and how exactly the mistake happened.

According to Fox News, a behind-the-scenes video apparently shows a cue card that Harvey read off of naming Miss Colombia as the winner.

But Miss Australia Monika Radulovic said on the Australian show Sunrise that all of the candidates saw Miss Philippines named on the teleprompter as the winner.

“The rest of us, the 77 other contestants were on the sidelines, on the stage, and we actually saw on the teleprompter, it said ‘Philippines, please take your first walk as Miss Universe’ after Colombia was crowned, so we were looking at each other thinking ‘what are we waiting?'” Radulovic said.

The Miss Universe organization didn’t pin the blame on any one person, issuing a statement that just apologized for the mistake.

The excitement of live TV was evident tonight on The Miss Universe stage with over 10 million live fan votes tabulated. Unfortunately, a live telecast means that human error can come into play,” the organization said.

“We witnessed that tonight when the wrong winner was initially announced. Our sincerest apologies to Miss Universe Colombia 2015, Ariadna Gutierrez-Arévalo, Miss Universe Philippines 2015, Pia Alonzo Wurtzbach, their families and fans.”