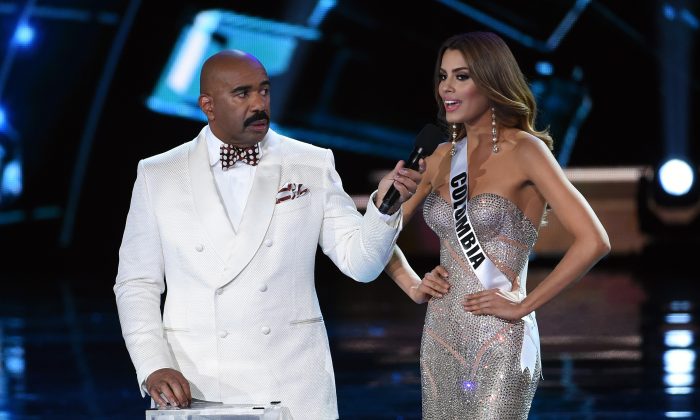 Host Steve Harvey (L) listens as Miss Colombia 2015, Ariadna Gutierrez Arevalo, answers a question during the interview portion of the 2015 Miss Universe Pageant at The Axis at Planet Hollywood Resort & Casino on December 20, 2015 in Las Vegas, Nevada. Gutierrez went on to be named the first runner-up. (Photo by Ethan Miller/Getty Images)
Entertainment

Steve Harvey has recorded a new interview with Miss Colombia, in which he begs forgiveness from Ariadna Gutierrez.

The apology comes after Harvey, while hosting the Miss Universe pageant, mistakenly named Gutierrez as the winner.

Moments later, in one of the more awkward TV situations of last year, he owned up to his gaffe and correctly named Miss Philippines as the winner.

Sources told TMZ that Gutierrez appeared on Harvey’s talk show, on which the interview took place.

She also appeared on the Today show as well as Telemundo. All three shows are NBC-owned properties.

Harvey had already apologized to Miss Philippines in person and Miss Colombia in public, but he said he relished the chance to apologize to her, too, face-to-face.

“He sobbed and sobbed,” a source said.

While Miss Philippines was also part of the recording for Harvey’s show, she and Gutierrez did not share the stage at any point.

It seems things are going well nowadays for Gutierrez despite ultimately being second place in the pageant.

“Ariadna thought having the crown taken away was the worst day of her life,” one source said. “She now realizes it was the best day. She’s making a fortune!”