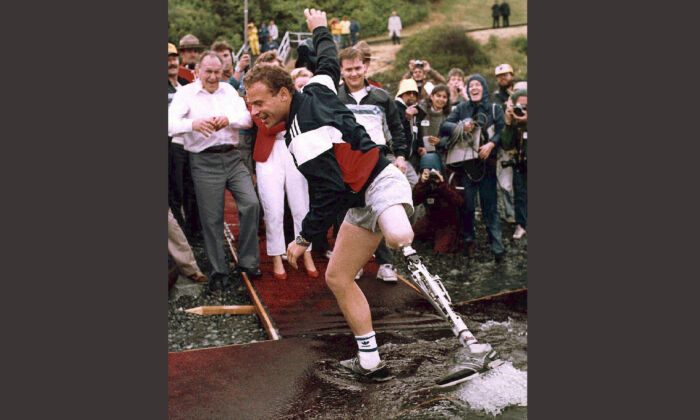 Steve Fonyo dips his artificial limb in the Pacific Ocean in Victoria after completing his cross-country run in this 1985 photo. (The Canadian Press/Chuck Stoody)
Canada

Steve Fonyo, Who Lost Leg to Cancer and Ran Across Canada to Raise Funds, Dead at 56

Steve Fonyo, who lost his leg to cancer as a child and ran a marathon across Canada to raise millions for cancer research, has died.

Fonyo’s niece Melody Kruppa says Fonyo had what appeared to be a seizure in hotel room in Burnaby, B.C. on Friday and paramedics could not revive him.

Fonyo lost a leg to cancer when he was 12 and became a national hero in 1985 after completing a Canada−wide marathon to raise money for cancer research, five years after Terry Fox attempted the same thing.

Fonyo was appointed an officer of the Order of Canada in 1985 at the age of 19 — the youngest person to receive the honour at the time.

But his membership was terminated in 2009 following multiple criminal convictions.

The decision sparked public outcry, with critics saying at the time he should be remembered as a hero despite his struggles later in life.