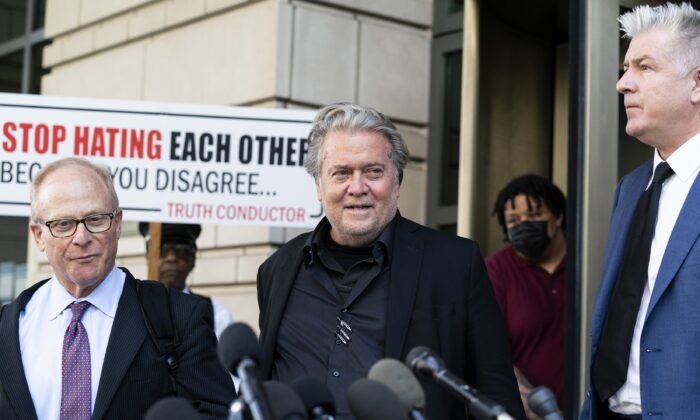 “This is what happens in the last days of a dying regime. They will never shut me up; they’ll have to kill me first. I have not yet begun to fight,” Bannon, who was handcuffed, told reporters while walking to court.

After pleading not guilty, Bannon, 68, was released on bail after his lawyer entered the plea on his behalf. If convicted, the former Breitbart News chief could face up to 15 years in prison.

Prosecutors accused Bannon of defrauding donors who contributed more than $15 million to a private fundraising drive, known as We Build the Wall, which would create a privately owned section of the U.S.-Mexico border wall.

“It is a crime to profit off the backs of donors by making false pretenses,” left-wing Manhattan District Attorney Alvin Bragg said at a press conference with New York Attorney General Letitia James. Both are Democrats.

Bannon was charged by the Department of Justice (DOJ) in August 2020 on similar charges. Former President Donald Trump pardoned Bannon nearing the end of his term in January 2021, but presidential pardons do not prohibit state investigations and charges.

Another individual who was charged by the DOJ, former Air Force veteran Brian Kolfage, pleaded guilty in April to wire fraud and other charges.

According to Thursday’s indictment, prosecutors claimed Bannon concealed how the head of the wall fundraising drive was receiving thousands of dollars in donor money despite saying he wouldn’t take a salary.

“I’ve got news for them,” Bannon also said outside the courthouse, referring to prosecutors. “We are going to win a sweeping landslide at every level, from school boards to election officials … we are not going to back down and they will not be able to shut me up.”

He added to reporters that the charges are “an irony” because “on the very day the mayor of this city [Eric Adams] has a delegation down on the border, they are persecuting people here, that try to stop them at the border.”

“This is all about 60 days from the day” of the November 2022 midterms, Bannon continued.

In July, a jury found Bannon guilty of contempt of Congress for defying a subpoena from the House Jan. 6 committee. For that case, he faces a minimum sentence of 30 days and jail and a fine, according to the Department of Justice.

Bannon is slated to appear in court again on Oct. 4.