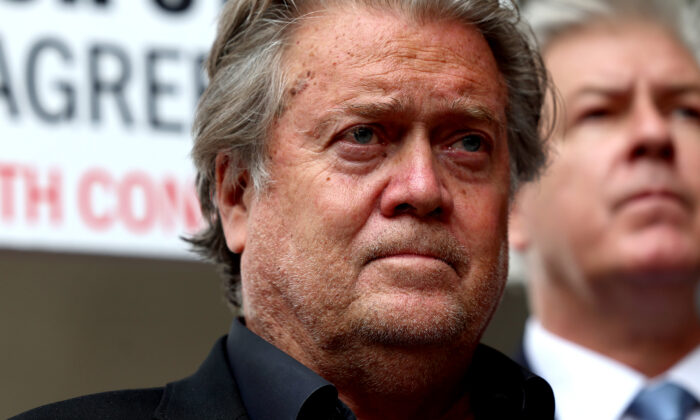 Steve Bannon Chooses Not to Testify in Own Defense

WASHINGTON—Former White House adviser Steve Bannon will not testify in his contempt of Congress trial, his attorneys said in federal court on July 21.

Bannon “very much wanted to do so since the day he was indicted,” lawyer David Schoen told the court. But Bannon “would be barred from telling the true facts,” he added.

U.S. District Judge Carl Nichols, a Trump appointee overseeing the case, has in recent days rejected a number of arguments the defense wanted to make, including references to former President Donald Trump’s exercise of executive privilege after Bannon was subpoenaed by the House of Representatives committee probing the Jan. 6, 2021, breach of the U.S. Capitol.

Bannon was charged with two counts of contempt of Congress after declining to comply with the subpoena, which asked for documents and testimony relating to the breach. The panel said that Bannon had information that would inform its investigation into what happened.

Bannon worked for the White House in 2017. He currently hosts a podcast called “War Room.”

Bannon’s refusal to obey the subpoena stemmed from his respecting Trump’s privilege claim, according to defense lawyers. Prosecutors say Bannon broke the law by not complying and is guilty.

Bannon’s lawyers filed a motion to dismiss on Thursday, asserting prosecutors did not prove beyond a reasonable doubt that their client is guilty.

Amerling called it “very unusual” for a person subpoenaed by Congress to refuse to cooperate at all. She also said she could not recall who decided to compel Bannon to appear before the committee.

Amerling was “equivocal” in her testimony on the matter, Evan Corcoran, another Bannon lawyer, said.

Under the U.S. Constitution’s Sixth Amendment, a defendant has the right to confront the witnesses against him, but no members of the panel appeared in court, drawing criticism from the defense.

If Rep. Bennie Thompson (D-Miss.), the chairman, had testified, “we would have presented evidence to the jury that he was not the author of those letters so they were not, in fact, an official position of the select committee,” Corcoran said.

Amanda Vaughn, a prosecutor, said that it was “irrelevant” who made the decisions to order Bannon to appear and to hand over documents.

“The dates are on the subpoena. He violated them. The evidence is clear that the defendant did not provide documents on Oct. 7, did not show up on Oct 14,” she said.

Nichols decided not to rule on the motion to dismiss or any other motions entered Thursday until after a verdict is reached.

“It is the parties’ shared view that I shouldn’t do anything about the motion for acquittal,” he said.

Nichols was also presented with concerns about the proposed jury instructions.

“Our objection is it wades too much as to what wouldn’t be a defense in this case,” Schoen said. “I don’t think it needs to be hammered into the jury in the case. It would confuse the jury, what is a defense?”

No immediate decisions were made on the instructions.

The court is scheduled to return on Friday morning.

Bannon told reporters outside the courthouse that he’s testified before Congress in the past, but that he followed the same pattern each time.

“Every time the exact same one. Executive privilege, a lawyer’s engaged, they worked it out,” he said.