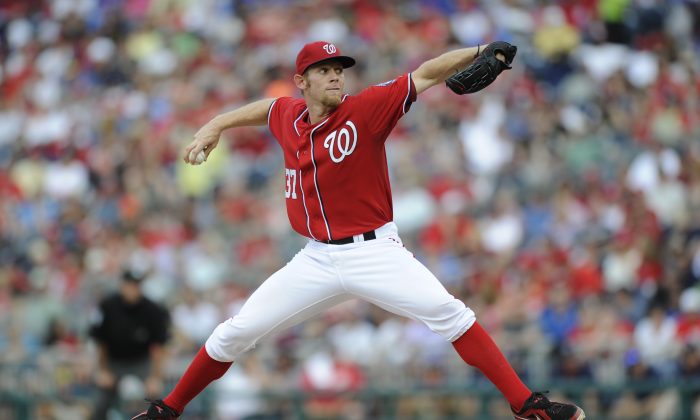 Washington Nationals starter Stephen Strasburg delivers a pitch during the fifth inning of a baseball game against the Chicago Cubs, Saturday, May 11, 2013, in Washington. (AP Photo/Nick Wass)
Baseball

CLEVELAND — Pretty much everything about Stephen Strasburg’s return from the disabled list went well except the result.

Washington’s ace right-hander allowed one run and one hit in five innings, but the Nationals’ offense did nothing to support him in Sunday’s 2-0 loss to the Cleveland Indians.

“I felt really good and definitely could have gone for a few more innings, but they didn’t want me to,” he said. “It was good to be out there after two weeks.”

Strasburg (3-6) was activated before the game and made his first start since May 31 when he strained a muscle in his back. He showed flashes of the brilliance the Nationals have become accustomed to seeing by retiring eight in a row at one point and striking out four. Strasburg also showed some of the effects from the layoff by walking four and piling up 82 pitches.

“He was a little bit rusty and didn’t have his command, but I thought he settled in pretty well,” Washington manager Davey Johnson said. “He had a maximum of 80.”

The only hit Strasburg allowed was costly. Carlos Santana’s RBI single with one out in the fourth gave Cleveland starter Corey Kluber the only run he needed. Kluber (5-4) pitched eight shutout innings and escaped three big jams to win for the first time in 11 career starts at Progressive Field.

Kluber gave up seven hits, struck out eight and didn’t walk a batter. He wiggled out of trouble in the seventh after the Nationals loaded the bases with no outs.

Strasburg had gone 2-0 with a 1.17 ERA over a three-start stretch (three earned runs in 23 innings) before exiting his last appearance after two innings against Atlanta. He was placed on the disabled list six days later but was cleared to return following Thursday’s bullpen session in Colorado.

“I tried to pound the strike zone as much as I could, but it was a little bit hit or miss, which is to be expected,” Strasburg said.

Strasburg walked leadoff hitter Michael Bourn in the first before Mike Aviles hit into a double play. Jason Kipnis drew the second walk of the inning but Santana popped up. That began a stretch in which Strasburg retired eight straight.

“Once I got through the first inning, it started to click,” he said. “I got into some trouble when that happened, but it was a good feeling.”

Kipnis drew a one-out walk in the fourth, stole second and went to third when catcher Jhonatan Solano’s throw bounced into center field. Santana’s single up the middle put the Indians ahead.

Kipnis’ sacrifice fly in the eighth scored Cleveland’s other run.

Vinnie Pestano pitched the ninth for his first save of the season.

Indians first baseman Nick Swisher, in a 6-for-55 skid, didn’t play because of a sore left shoulder.

Kluber also escaped jams in the fourth and sixth, which were both set up by errors.

“I take it pitch by pitch,” Kluber said. “I’m not thinking too far ahead. I’m not thinking if I can get a double play here or a strikeout there. Those things happen as a result of making good pitches.”

The Nationals went for 2-for-11 with runners in scoring position, a frustrating day.

“We had a bunch of runners on third with less than two outs, but we just didn’t score,” Johnson said. “We had the right guys up.”

Adam LaRoche struck out with men on first and third and no one out in the fourth. He also bounced into a double play with two on to end the sixth.

“I don’t like it when we beat ourselves,” LaRoche said. “We should have had an easy four runs on the board with the opportunities we had. It seems like we get one or two chances every game where we don’t put it in play or hit it to the wrong spot. I wish we had a solid answer for why it keeps happening.”

Anthony Rendon led off the fourth with a single, then third baseman John McDonald fielded Ryan Zimmerman’s grounder but threw wide into center field. Kluber regrouped with runners at the corners and struck out LaRoche, Jayson Werth and Ian Desmond.

Denard Span reached on an infield hit and took second on a throwing error by Kipnis at second base in the sixth. Rendon’s single moved Span to third but Zimmerman struck out and LaRoche hit into a double play.

Werth started the seventh with a bloop double to right. Desmond was hit by a pitch before pinch-hitter Steve Lombardozzi popped up a bunt attempt. Kluber tried to make a diving catch but the ball fell in about halfway between home plate and the mound, loading the bases.

First baseman Mark Reynolds grabbed Solano’s line drive and beat Lombardozzi to the bag for a double play. The inning ended when Roger Bernadina grounded out.

NOTES: Indians RHP Chris Perez (right shoulder strain) made his first rehab appearance for Class A Lake County, pitching one scoreless inning against Great Lakes. The Indians’ closer started the game, allowing two hits while striking out one. … The Nationals optioned LHP Xavier Cedeno to Triple-A Syracuse to make room for Strasburg on the 25-man roster. … Washington wraps up its nine-game road trip with a three-game series in Philadelphia beginning Monday. RHP Dan Haren (4-8) faces LHP John Lannan (0-1), who former Nationals pitcher, in the opener. … The Indians continue their nine-game homestand Monday against Kansas City. RHP Carlos Carrasco (0-2) takes on RHP James Shields (2-6) in the opener of the three-game set.