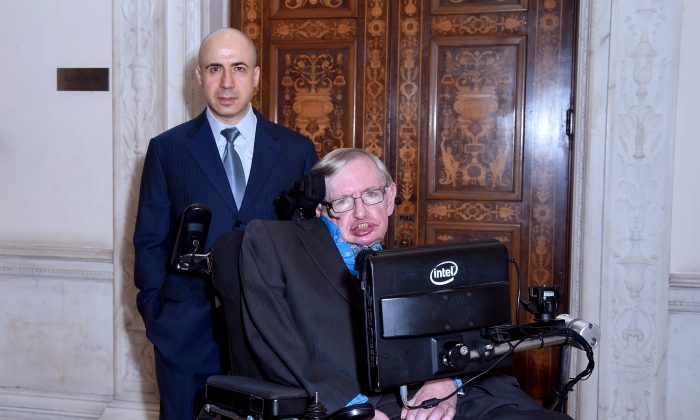 Billionaire Yuri Milner and Theoretical Physicist Stephen Hawking ahead of a press conference on the Breakthrough Life in the Universe Initiatives on July 20, 2015 in London, England. (Stuart C. Wilson/Getty Images for Breakthrough Initiatives)
Science

Famed scientist Stephen Hawking and Russian billionaire Yuri Milner is teaming up on a $100 million project that will send an army of nano-spacecrafts to explore the universe, and hopefully, find aliens.

The Breakthrough Initiative aims to build prototypes of light-propelled nanocrafts that could travel at 20 percent the speed of light, which would enable it to travel 25 trillion miles to Alpha Centauri, the closest star-system from the solar system, in just 20 years.

Some astronomers believe that there could be an Earth-like planet in the “habitable zones” of the three-star system.

“Earth is a wonderful place, but it might not last forever,” Hawking said in a statement. “Sooner or later, we must look to the stars. Breakthrough Starshot is a very exciting first step on that journey.”

The program will be led by Pete Worden, the former director of NASA AMES Research Center, and Mark Zuckerberg will be on the board in addition to Hawking and Milner.

Hawking and others are counting on Moore’s Law to continue apace and enable the development of cameras, photo thrusters, and metal sails that are a mere few hundred atoms thick.

“The human story is one of great leaps,” Milner said in a statement. “Fifty five years ago today, Yuri Gagarin became the first human in space. Today, we are preparing for the next great leap—to the stars.”

The Breakthrough Initiative comes on the crest of public interest in space exploration and colonization. The past few years have seen projects like the Mars One initiative, which proposes to set up a permanent human colony on Mars by 2027.

Elon Musk, founder of SpaceX, has explicitly touted extinction scenarios as a motivation for why human should colonize other planets in the solar system, and beyond.