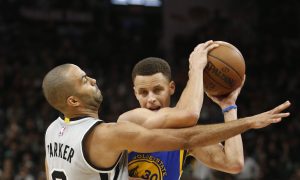 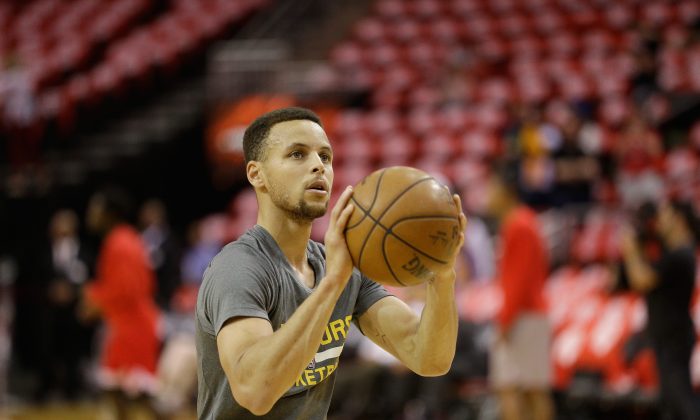 Injured Golden State Warriors guard Stephen Curry—who’s been out since April 24—may play in some scrimmages later this week, according to head coach Steve Kerr.

Curry, who has a sprained MCL, did stationary shooting drills on Saturday. He is unlikely to play in Tuesday’s playoff game, but has not been officially ruled out, Kerr told reporters.

“Before he’s going to play a game, he has to be on the floor in a 5-on-5 situation, which means it’s pretty slim that he would be out there in Game 2,” Kerr said.

“Maybe Thursday, Friday there’s a chance we could get him on the floor in a scrimmage situation, but it’s all speculation.”

It’s been a rough start to the playoffs for the NBA’s leading scorer, who’ll likely win his second straight MVP award.

Curry injured his ankle in Game 1 of the opening round against the Houston Rockets. After sitting out Games 2 and 3, he started Game 4 but slipped on a wet spot near mid-court just before halftime and hasn’t played since. The Warriors still dispatched the Rockets in five games.

If Curry even returns for a Game 3—which will be Saturday—he will only have played 39 of a possible 336 regulation minutes of playoff basketball, after placing 20th in the NBA with 2700 minutes played during the regular season.

When he did play in the regular season, Curry was quite a sight to see. Already the record-holder for most single-season three-pointers with 286 (set last year) Curry smashed his own record by draining a jaw-dropping 405 this year. He also led the league by hitting 90.8 percent of this free throws and set a career-best by his hitting 50.4 percent of his field goal attempts.

He also improved his scoring average from 23.8 last year to 30.1 this season.