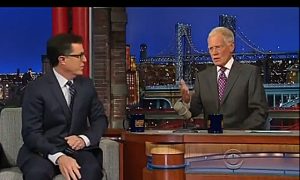 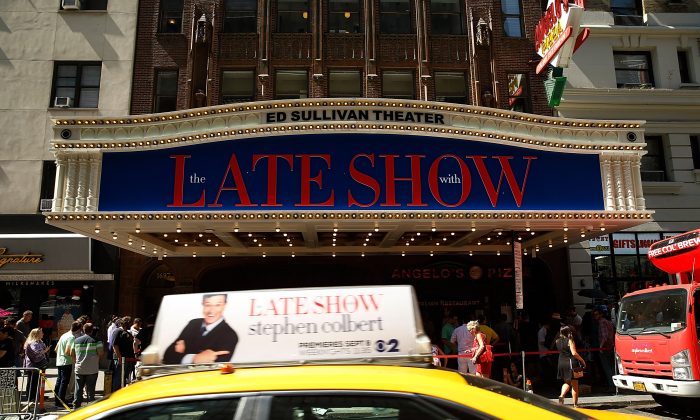 Atmosphere at the first taping of "The Late Show With Stephen Colbert" on September 8, 2015 in New York City. (John Lamparski/Getty Images)
Life & Tradition

Last month, Colbert – the new host, executive producer and writer of CBS’ The Late Show – told the New York Post, “Every night I light a candle that [Donald Trump] stays in the race until September 8.”

Not surprisingly, during Colbert’s debut, the Republican front-runner was the butt of the host’s barbs.

“Just like the rest of the media, I will be covering all the candidates who are Donald Trump,” Colbert gleefully said.

After playing a clip of Trump saying he was swearing off of Oreos because Nabisco was closing a plant in Chicago and opening one in Mexico, Colbert gorged himself on Oreos while riffing about everything from Trump’s stance on immigration (“He’s the only candidate brave enough to deport the Keebler elves”), to his hair.

It’s no coincidence Colbert chose to begin hosting the show the day after Labor Day, the traditional start of the political campaign season. In a USA Today article published earlier this week, Colbert was quoted as saying he is “uniquely positioned” to discuss politics on his show.

Colbert did praise his predecessor, David Letterman, effusively. But if the first episode is any indication, Colbert will attempt to craft the show in his own image – with politics playing a bigger role on The Late Show than it has in the past.

Will Bush Get a Colbert Bump?

Indeed, Colbert firmly established himself as a political satirist while hosting Comedy Central’s The Colbert Report. And while actor George Clooney made an appearance on The Late Show – as did musical legends Mavis Staples and Buddy Guy – politics were front and center Tuesday night, with Republican presidential candidate and former Florida governor Jeb Bush the featured guest.

Colbert introduced Bush as, “with one exception aside – which we’ll get to later – the front runner for the Republican nomination.” (Actually, Colbert was being generous; Bush has been polling in the single digits, trailing political outsiders Trump and Ben Carson.)

It’s not clear whether Bush will get the “Colbert bump” – a term Colbert coined on his previous show suggesting that an appearance will boost a guest’s popularity.

The study found no difference in votes for candidates who appeared on the show. And while Democratic candidates did see a significant bump in campaign contributions, donations remained flat – and even dropped in some cases – after Republican candidates came on the show.

Colbert’s emphasis on politics was true to form, though his personality was clearly his own – not the iconic conservative pundit caricature he formulated for his previous show.

As Colbert told Bush, “I used to play a narcissistic conservative pundit; now I’m just a narcissist.” And in the show’s opening monologue, Colbert told the audience, “With this show I begin the search for the real Stephen Colbert. I only hope I don’t find him on Ashley Madison.”

Prior to last night’s show, Colbert made clear he would be himself on The Late Show, saying he wanted to drop the character so he could have honest conversations with his guests.

The Colbert Report and 3 Other Productions Blatantly Copied in China

On last night’s show, the ‘real’ Stephen Colbert was considerably less inane. But he was every bit as political – and considerably more straightforward – than his Colbert Report meme.

He asked Bush how he differed from his brother on policy and whether he thought he could bring people together, noting that governing had become “a game of blood sport.”

Speaking specifically about presidential politics, Colbert observed that “for seven years on the Republican side, the emotional needle has been nailed – bang – in one spot: ‘Obama Bad’… And the Democrats have to argue, ‘He’s the best’ just to counter that emotional narrative that the Republicans have. Do you think you could change that sort of [narrative that] the other side is the devil?”

But Colbert brought the funny to the interview, too. When Bush discussed improvements in school performance while he was governor of Florida, Colbert noted that schools are a local issue. He then asked, “What can you, as president, do for the schools other than have your picture up in the classrooms?”

Viewers should expect a similar focus on politics in the coming weeks: Democratic presidential candidate Bernie Sanders and Vice President Joe Biden are both set to appear as guests.

And it’s clear that – as I’ve previously argued – Colbert continues to play the role of jester, speaking truth to political power with humor.

Only now he does so from behind the desk of a real late night talk show rather than a fake news show, with the potential to reach a considerably larger audience on a major broadcast network.

Julia Fox, Associate Professor in the Media School , Indiana University, Bloomington. This article was originally published on The Conversation. Read the original article.