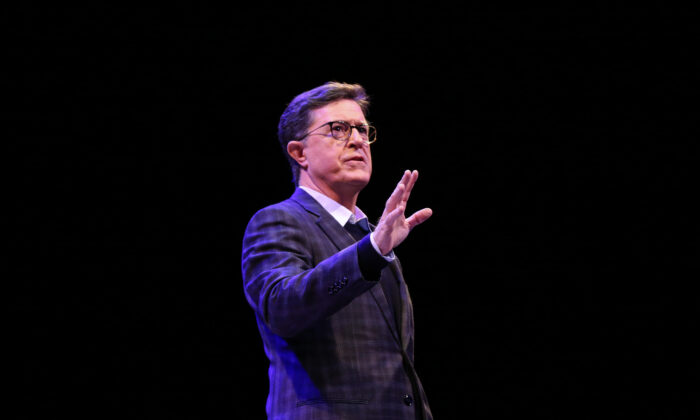 Stephen Colbert speaks during an event in Newark, N.J., on Dec. 7, 2019. (Bennett Raglin/Getty Images for Montclair Film)
Crime and Incidents

Staffers with “The Late Show With Stephen Colbert” were taken into custody on June 16 at a U.S. House of Representatives building that is connected to the U.S. Capitol.

According to the U.S. Capitol Police, the crew had been directed to leave earlier in the day. The staffers were charged with unlawful entry and additional charges may be pressed.

CBS has said the group included Triumph, a puppet manned by Robert Smigel.

Colbert, speaking about the matter for the first time, said that the purpose of the visit was to interview members of Congress to “highlight” the hearings that a select House committee has been holding on the Jan. 6, 2021, breach of the Capitol.

The crew obtained security clearance and filmed all day June 15 and June 16 and were invited into the offices of the members who were being interviewed, he added.

“Now end of day two, Thursday evening, after they finished their interviews, they were doing some last-minute puppetry and jokey make-’em-ups in a hallway when Triumph and my folks were approached and detained by the Capitol Police, which actually isn’t that surprising,” Colbert said. “The Capitol Police are much more cautious than they were, say 18 months ago. And for a very good reason.”

“This was not some spontaneous outbreak of insurrection. No, this was a meticulously planned coup from afar,” Carlson said on his show.

Colbert said that Capitol police officers and his staffers were “just doing their job” and that those arrested were released after being processed. He said that attempts to link the situation with the breach were “predictable” but wrong.

Colbert did not name any of the members that his team interviewed.

According to Rep. Rodney Davis (R-Ill.), a top Republican, a staff member for Rep. Adam Schiff (D-Calif.) initially let the team into the building and a staffer for Rep. Jake Auchincloss (D-Mass.) later let the team back in after they were removed.

Schiff’s office has not responded to requests for comment.

“The congressman had a scheduled interview with CBS, as did other members of Congress. Our contact with them ended well before the building closed for the evening,” Matt Corridoni, a spokesman for Auchincloss, told The Epoch Times in an email. “We do not condone any inappropriate activity and cannot speak to anything that occurred after hours.”

Colbert’s crew was reportedly banging on the doors of offices belonging to Republican members of Congress before they were arrested.

The Capitol Police is not subject to the Freedom of Information Act, and rarely releases documents pertaining to investigations and other matters.