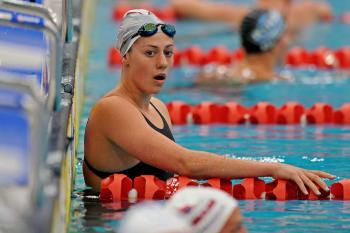 Australia's Stephanie Rice stands in her lane after finishing her heat of the women's 200 metre individual medley at the Australian Swimming Championships and Selection Trials for the Delhi Commonwealth Games, in Sydney on March 16, 2010. (GREG WOOD/AFP/Getty Images)
US

Ms. Rice’s injured shoulder, caused by a swollen bursa, has forced her to skip the individual medley events.

According to Australia’s Herald Sun, the triple Olympic gold medallist revealed that the mysterious injury first appeared on the eve of the Beijing Games in 2008 and has worsened noticeably in the past two years. The injury is threatening her lead up to the 2012 Olympic Games.

Ms. Rice has been getting by with painful cortisone injections in a bid to be fit for the Pan Pacific titles, the Herald Sun reported today, Aug. 14.

But, with one eye on defending her 200m and 400m titles in London, and the other on the Delhi Commonwealth Games in October, the swimmer has sought advice on possible surgery after the games.

"It's definitely something I've considered and I've looked down that path because it's been frustrating, and I don't want to have to deal with this for the next two years leading into 2012," Ms. Rice said. "It's been something that's been getting worse for the past two years … something happened after [the] nationals [in March] and it's flared up again and I haven't been able to shake it."

Born June 1988 in Brisbane, Queensland, the Australian swimmer currently holds the world record in the 400m individual medley, and won three gold medals at the 2008 Summer Olympics in Beijing. On Jan. 26, 2009, she was awarded the Medal of the Order of Australia (OAM).

Ms. Rice plans to limit her schedule at the Pan Pacs to sprint events, including the 50m and 100m butterfly, 50m backstroke, and 100m freestyle, in order to nurse herself through to Delhi.