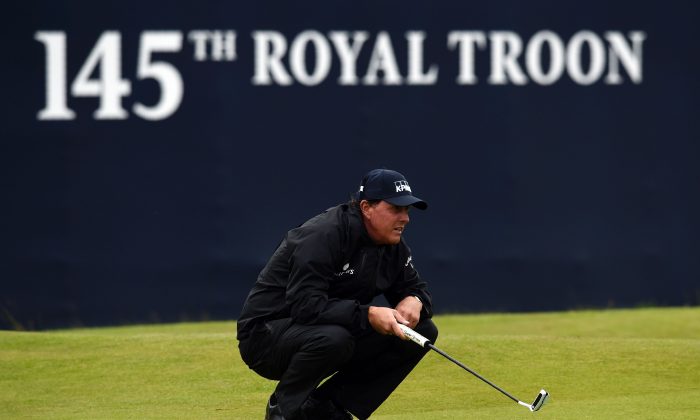 Phil Mickelson lines up a putt on the 18th green during his second round 69 on day two of the 2016 British Open Golf Championship at Royal Troon in Scotland on July 15. (Andy Buchanan/AFP/Getty Images)
Golf

Stenson Surges at the Open: Mickelson One Ahead as Weather Worsens

M. James Ward
View profile
Follow
biggersmaller
Print
TROON, SCOTLAND—Playing golf in Scotland is a game of constant adjustments—few things remain the same for long. The 145th Open Championship at Royal Troon has clearly experienced a 360-degree difference between the first and second rounds as the famous Scottish expression “nay wind, nay rain, nay golf” was ringing in the ears of all the competitors during Friday’s second round.

In round one benign weather was on the climate menu—the wind simply not a factor for the bulk of the day. As a result, players took advantage of the near endless opportunities to post numerous sub-par rounds. American Phil Mickelson led the way with a stellar major championship record tying 63 that was nearly a 62 as his final putt lipped out at the 18th hole.

Less than 24 hours later those same conditions turned dramatically. Wind and rain was the order of the day, intensifying as the day progressed. The outward half of holes which played in their traditional way downwind, played in the exact opposite way in round two. Mickelson played early in the day and again benefited from conditions that would only worsen as the round unfolded. Scoring a two-under-par 69 for a two round total of 132, Lefty is the halfway leader by one stroke over Sweden’s Henrik Stenson.

Mickelson is attempting to win his first professional golf event since his epic Open triumph at Muirfield in 2013. Should he be able to maintain the lead throughout the weekend rounds he would become just the 7th golfer to win The Open in wire-to-wire fashion—the last coming when Rory McIlroy did so at Royal Liverpool in 2014.
Stenson  fired the round of the day with a six-under-par 65 and for the 40-year-old it once again moves him into position to garner his first major championship. For Saturday’s 3rd round it will be Mickelson and Stenson in the final pairing. Interestingly, when Mickelson won his Open Championship in 2013 at Muirfield, it was Stenson who finished as the runner-up—his best finish ever in a major thus far. The Swede is looking for a reverse situation with 36 holes to play.

Mickelson faced a tough task—backing up a superb round with one that provides him clear momentum going into the weekend rounds. His start for the 2nd round was solid—three birdies going out—pushing him to eleven-under-par cumulatively. Phil’s play on the back nine included two bogeys at #12 and #15, with a birdie at the par-3 14th. In Mickelson’s own words his play was relatively “stress free” given the vast changes provided by Mother Nature.
“I thought it was a good round to back up the low round yesterday. I made one or two bad swings that led to bogeys but for the most part I kept the ball in play and played stress-free golf,” said the five-time major winner.
“I was actually more worried about yesterday’s round than I was about these coming rounds because I feel very comfortable in the conditions to be able to shoot a number, shoot a good score.”
Coming into this week’s Open Championship much focus was made on golf’s new fabulous four—Jason Day, Dustin Johnson, Jordan Spieth and Rory McIlroy. Scant attention was paid to Stenson even though he rebounded superbly after pulling out abruptly from the U.S. Open at Oakmont by winning the BMW International Open in Germany in the following week.

Stenson is ranked 6th in the world—the highest of any non-major winner. Henrik’s play in the 2nd round will not generate the kind of shock waves which Mickelson produced a day earlier but given the more unpleasant weather conditions his scoring was simply amazing—just one bogey at the par-4 9th while producing no less than seven birdies on the card.

“I haven’t been in contention for the last six majors and that was a big, big goal of mine to try and be up there and give myself a chance. So far, so good,” said Stenson whose 65 matched the lowest score ever shot by the late Payne Stewart in a second round at Royal Troon in The Open.

Trailing by three strokes at seven-under-par is Denmark’s Soren Kjeldsen and American Keegan Bradley. Five shots back is defending champion Zach Johnson with a group of five players lumped together at four-under-par 138 for the championship. McIlroy and Dustin Johnson are at two-under-par and although trailing by eight strokes there’s sufficient time to make up ground with stellar play. The expected weather forecast is stating more of the same—windy at times with rain always a possibility.

Mickelson is playing to further his considerable reputation and a second Open win at age 46 would clearly add considerably to the position he holds in the game today. Can he continue to hold himself above all the others? That remains to be answered. For Stenson the opportunity to win his first major can mark a lifetime achievement and to do so in The Open would be an even sweeter prize indeed. The first 36 holes have produced some fascinating golf—the final 36 holes will likely only add more to the mixture with The Claret Jug awaiting the next “champion golfer of the year.”