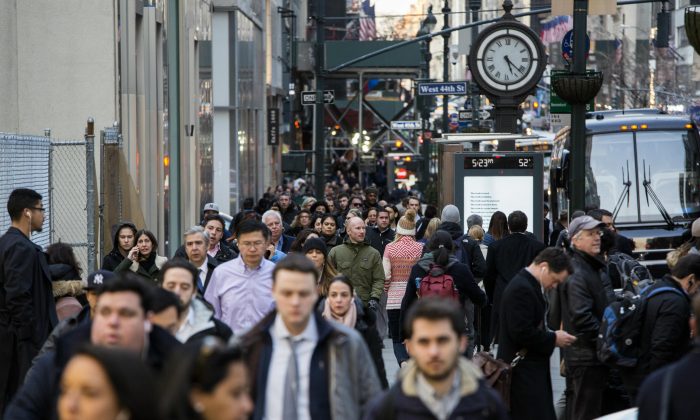 The United States economy added 223,000 new jobs in May, according to a Bureau of Labor statistics report punctuated with several record-shattering statistics, the latest in a month filled with indicators of blockbuster economic growth.

The number of job openings reached an all-time high, as did the number of small companies raising wages. Consumer confidence reached an 18-year high, while consumer spending grew to the best level in five months.

Industrial production recorded its third straight month of gains, while more than three out of four manufacturers reported hiring more workers and investing more in plants and equipment.

With these and a number of other indicators, it’s no surprise that the Federal Reserve revised its GDP growth estimate to 4.8 percent, up from 3.9 percent at the beginning of the month. The growth rate over the past four quarters averaged 2.9 percent, better than any of the eight years of the previous administration.

The world is taking notice, too. The United States is now the most competitive economy in the world, according to annual rankings by the World Competitiveness Center.

Unemployment figures for May again shattered multiple records as hundreds of thousands of Americans found jobs in the growing market.

Unemployment dropped to 3.8 percent, the lowest level since 1969, while the economy added 223,000 jobs, beating expectations by more than 17 percent, according to Goldman Sachs.

Unemployment figures can be deceiving, as they do not include those who haven’t sought a job over the previous four weeks. But even when counting the unemployed who’ve looked for a job over the past 12 months and also those who’d like a full-time job but have to settle for part-time jobs, the numbers stand at 7.6 percent, the best numbers since 2001.

While economists have warned for decades that the aging American population leaves ever fewer people to carry the economy, that was not the case in May. More people over 55 joined the labor force last month, while it was mainly people under 45 who left.

As a result, some “two-thirds of the drop in the unemployment rate in May was because workers found jobs, while about one-third of the drop was from people leaving the labor force,” the left-leaning Economic Policy Institute noted.

There are almost 95 million people considered not in the workforce—those over the age of 16 who don’t work and are currently not looking for work, mostly because they are students, homemakers, ill, or retired. Among them, there were about 5.5 million who wanted a job in 2017.

That number has been declining in recent years—a hint that more people who had given up on finding a job are now trying again and succeeding.

President Donald Trump ran for office with a promise of reviving the economy, and the results look to boost his agenda as the midterm elections approach.

The economy has been beating expectations for over a year.

In March, employers offered 6.55 million jobs, the most ever recorded, according to the Labor Department. That amounts to one job for almost every person considered unemployed.

More than two in three Americans also believe it’s now a good time “to find a quality job,” the highest level since Gallup started to ask the question in its polls 17 years ago. This poll never received a more than 50 percent positive response before Trump assumed office.

Since Trump took office, the median household income increased almost 3.2 percent, reaching a record $61,483 in April, according to estimates by Sentier Research based on monthly Census Bureau survey data.

According to a recent YouGov poll, almost two-thirds of Americans view the economy positively and more than two-thirds believe that  Trump’s policies, which include cuts to regulations and taxes, and his planned investment in infrastructure, are at least partly responsible.

These indicators, coupled with tax revenue figures from the Congressional Budget Office, prove Trump’s economic theory that rapid growth can solve a host of economic and social problems, according to Stephen Moore, a distinguished visiting fellow for Project for Economic Growth at The Heritage Foundation.

Moore points out that the federal government recorded the largest surplus in history in April, despite worries that Trump’s tax cuts would reduce tax revenue. Tax revenues totaled $515 billion on April, 13 percent higher than the same month last year. Meanwhile, the federal government took in $218 billion more than it spent that month, the biggest surplus in history.

“If the higher growth rate that Trump has already accomplished remains in place, then the impact will be well over $3 trillion of more revenue and thus lower debt levels over the decade,” Moore writes. “Putting people to work is the best way to balance the budget. Period.”